Taking it seriously - A guide to accompagny the Recommendation CM/Rec(2015)3 of the Committee of Ministers of the Council of Europe to member States on the access of young people from disadvantaged neighbourhoods to social rights, by bringing its content closer to policy makers, youth work practitioners, yout organisations and youth workers. It provides step-by-step information and guidance on the implementation of the recommendation.

In and around many cities, social 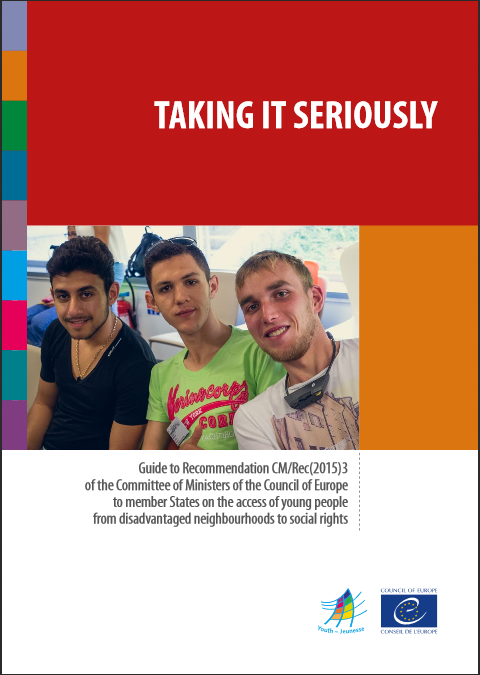 and economic imbalances have led to the development of disadvantaged neighbourhoods, where diversity is also accompanied by poverty and often marginalisation or exclusion. This is sometimes combined with different forms and levels of de facto social segregation, discrimination and violence.

At times of economic and social crisis, feelings of powerlessness and anxiety about the future risk deepening local tensions and underlying conflicts. Young people are often at the centre of these tensions because they are more vulnerable and insecure, and because they are more directly affected by un-certainties regarding the development of their autonomy, as well as participation in society and contribution to its development.

The Council of Europe has challenged itself to respond to these situations by adopting recommendations for its member states that encourage and support them in finding adequate policy responses to situations of exclusion, discrimination and violence affecting young people in disadvantaged neighbourhoods.

In early 2015, the Committee of Ministers of the Council of Europe adopted a policy recommendation with proposals for policy measures to member states in order to promote access to social rights for young people.