Challenges to academic integrity should be tackled beyond the legislative and institutional framework, root causes must be addressed 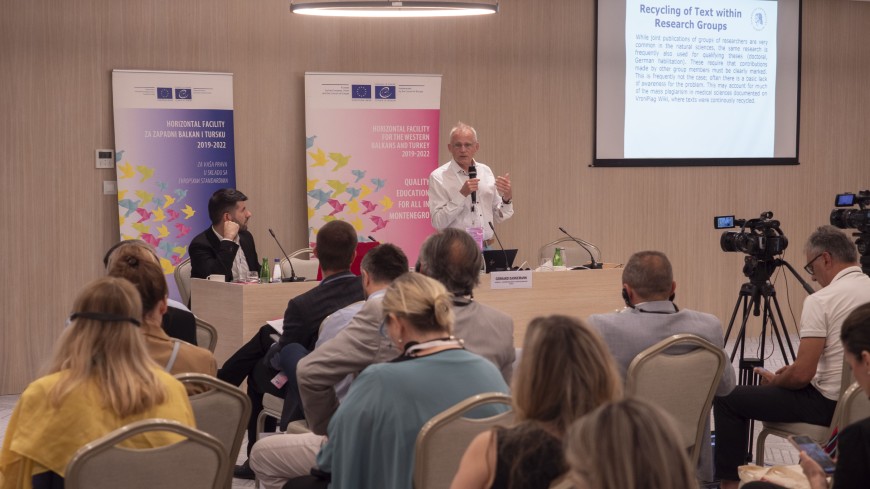 Full implementation of the measures necessary to safeguard against violation of academic integrity, such as plagiarism, facilitation of academic dishonesty, should always be in the focus of the academic community, while resolving integrity issues should go beyond setting legislative and institutional boundaries, and seek to address root causes for such behaviour. This was one of the messages from the conference “Emerging challenges in safeguarding academic integrity” held in Herceg Novi, under the joint European Union and Council of Europe action “Quality education for all”.

In her address to participants, Neda Ojdanić, Director of the Tertiary Education Directorate in the Ministry of Education of Montenegro said that the principles of academic integrity are fundamental to the functioning and work of the academic community and the overall academic environment.

“This is recognised in the 2022-2026 Higher Education Development Strategy, which is in the final stages of preparation. According to the Strategy full application of the measures necessary to safeguard against the violation of academic integrity should always be in the focus of the academic community,“ said Ojdanić. “The national policy ensuring academic integrity should not only entail monitoring the occurrence and nature of cases of academic misconduct and taking measures to sanction such behaviour, but also aim at resolving the underlying causes of such behaviour. Guided by the principles of the Law on Academic Integrity, the Ministry of Education will continue its efforts on harmonisation of the normative acts with the EU policy and good European practices in this field.”

The Head of Operations at the Council of Europe Programme Office in Podgorica, Evgenia Giakoumopoulou, said that preventing unethical behaviour requires regulatory and institutional reforms.

“These reforms have been ongoing in Montenegro, with the recent adoption of the Law on Academic Integrity. Higher education institutions have also taken steps in promoting and safeguarding academic integrity. However, it would be wrong to think that academic misconduct could be tackled by the “directive formula” of new regulations alone. The law always follows the change in public attitude, not the other way around, so addressing integrity issues should go beyond legislative and institutional framework”, said Giakoumopoulou. 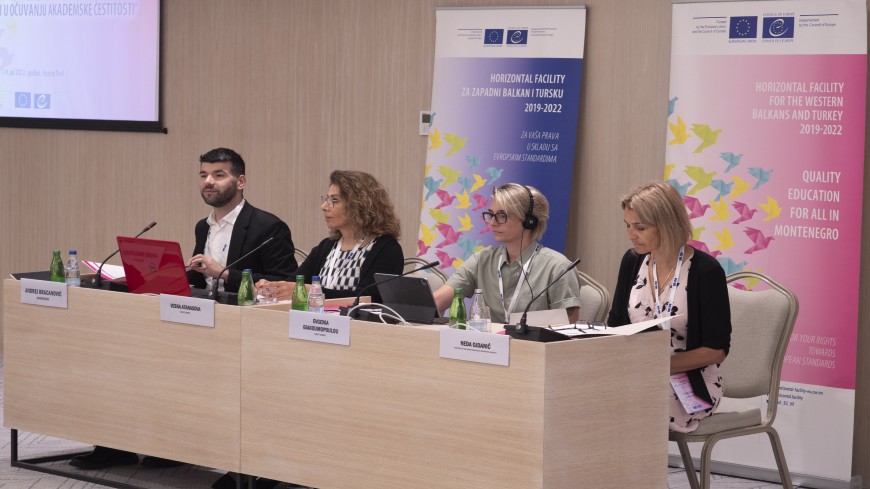 Vesna Atanasova, Programme manager at the Education Department of the Council of Europe, said that the adoption of the Law by the authorities of Montenegro confirmed that they perceive the risks to academic integrity to be among the major challenges for both academia and the society as a whole in the process of reforming higher education.

“From the Council of Europe`s perspective, it is important to understand that academic integrity is a key part of quality education mix - this is clearly defined in the Council of Europe Committee of Ministers Recommendation to governments which specifies that corruption in education constitutes a violation of the basic principle of equal rights, and that quality education must be free of corruption. The Committee of Ministers in its Recommendation has suggested that anti-corruption measures should also include the development of an environment in which corruption is considered unacceptable by stakeholders and the public at large, and in which those who engage in corruption meet with disapproval and are brought to justice. On this matter, on the 13 July the Committee of Ministers is expected to adopt the Recommendation on education fraud, which will become the new CoE standard in the field of academic integrity“, concluded Atanasova.

The two-day conference brought together around 60 participants from Montenegro, mostly members of the academic community and representatives of relevant public authorities. It was organised under the joint European Union and Council of Europe action “Quality education for all” that is a part of the joint programme "Horizontal Facility for the Western Balkans and Turkey 2019-2022".