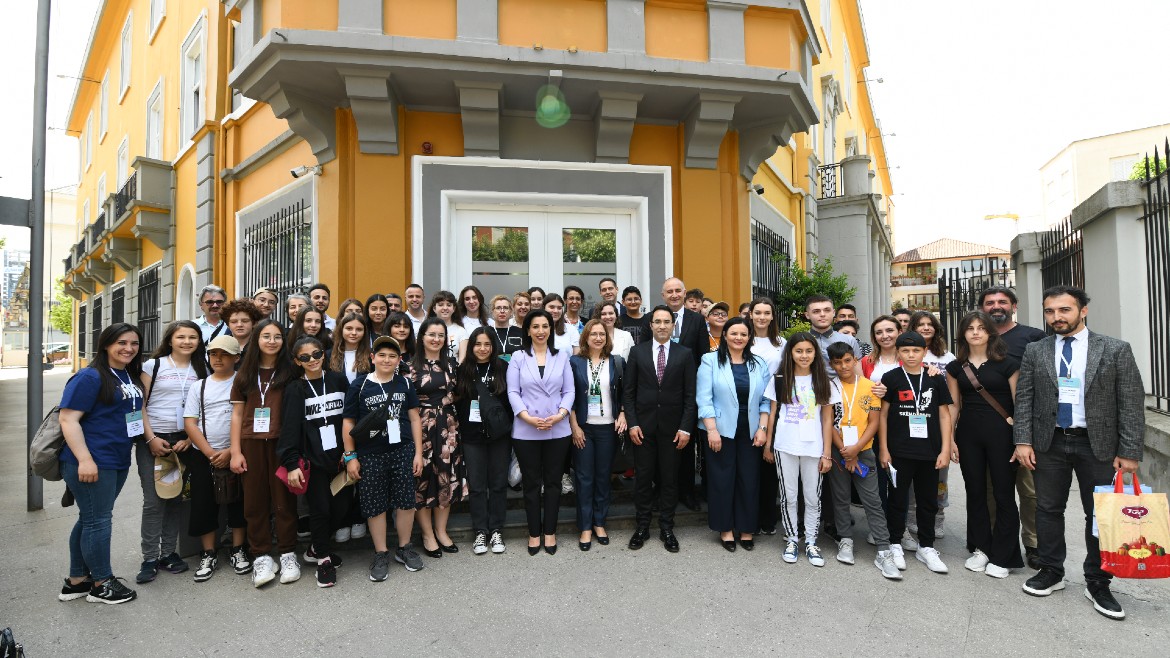 In the framework of the project “Strengthening democratic culture in basic education in Turkey”*, 22 lower-secondary school children from the 10 pilot provinces of the Turkish project, accompanied by 10 teachers and representatives of the Turkish Ministry of National Education, were given the opportunity to visit Tirana and other cities and get involved in activities based on the Reference Framework on Competences for Democratic Culture (RFCDC) during a study visit to Albania which took place from 16-20 May 2022.

The study visit was organised in cooperation with the project “Strengthening Democratic Citizenship Education in Albania”**. The aim of this study visit was to familiarise participants with the whole school model and democratic school practices being used in primary and lower-secondary education (grade 4 to 9) in Albania and share experiences and best practices from both countries. Group discussions, as well sports, dancing and artistic performances allowed them to understand the value and also to acknowledge the challenges of collaborating with peers of a different culture and who speak a different language. The group was also able to discover the country and its traditions, while Albanian schools were excited to host them in a true spirit of an intercultural school.

During their visit to the Ministry of Education and Sports, the visitors were addressed and welcomed by the Albanian Minister of Education and Sports, Ms. Evis Kushi, who introduced the topic of the environment and sustainability – a subject close to the hearts of the schoolchildren, by highlighting the efforts made in collaboration with the Ministry of Tourism and Environment to advance human right to a clean and healthy environment. In addition, she mentioned that “exchange experiences such as these are very useful to students as they help promote inclusiveness, citizenship, education and peace”. The Education Counsellor Mr. Metin Bulut from the Turkish Embassy in Tirana also delivered opening remarks highlighting the fruitful collaboration between the two countries. Both Turkish and Albanian children presented to the officials and MPs some of the activities they held in their schools in relation to the preservation of the environment and to the issue of ensuring a sustainable consumption of resources. The Turkish delegation was welcomed also by the Head of the Council of Europe Office in Tirana Ms. Jutta Gützkow and the Deputy Major of Tirana Ms. Keti Luarasi.

The visit also included reflection on how to best implement the RFCDC in schools and how this particular activity was able to promote the culture of democracy, which helped children to further realise the importance of empathy, diversity, collaboration, teamwork, and civic mindedness, among others, and were able to discuss and think critically about matters important to them and living democracy at school altogether.

*Co-financed by the European Union and the Council of Europe, the project “Strengthening Democratic Culture in Basic Education” is implemented in co-operation with the Directorate General of Basic Education of the Turkish Ministry of National Education

** The project “Strengthening Democratic Citizenship Education in Albania” is implemented by the Council of Europe and funded by the Swedish International Development Cooperation Agency.