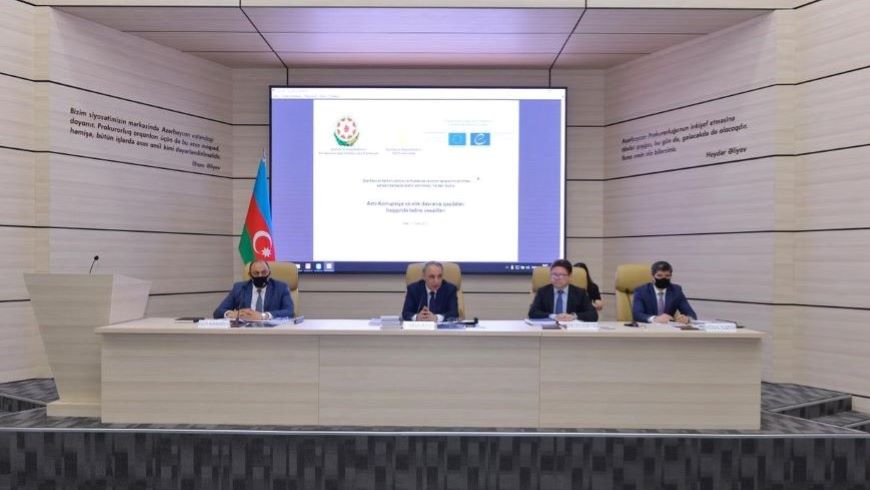 The Council of Europe is dedicated to supporting the Azerbaijani authorities in their efforts to fight corruption, money laundering and to strengthen the rule of law, accountability, and transparency. The Council of Europe’s strong engagement in these areas has been attested by the continued technical assistance provided to the Republic of Azerbaijan, notably through the European Union and Council of Europe Partnership for Good Governance (PGG) joint programme and its predecessors.

Within a previous cooperation activity, the Project on “Strengthening capacities to fight and prevent corruption in Azerbaijan” had produced a handbook on anti-corruption concepts, standards, and practices which included a chapter dedicated to the Azerbaijani context, as well as a second handbook on “Ethics in Public Service” integrating the national context.

At the initiative of the Azerbaijani authorities, these handbooks were presented on 17 June 2021 at the meeting of the Scientific-Advisory Council under the General Prosecutor of the Republic of Azerbaijan, in the context of the establishment of the new Anti-Corruption Training Centre of the Council, as a new institution fostering ownership and ensuring the sustainable capacity of Azerbaijani institutions to fight corruption.

The meeting also allowed to reiterate the importance and availability of other project resources developed in connection with this initiative. With a view to support future trainings on anti-corruption and ethics, the Council of Europe encouraged the Training Centre to engage certified trainers who had undertaken the Training of Trainers relating to this subject matter under the project. In addition, a teaching methodology, curriculum outline and three student readers for academic staff, developed by the project for higher education institutions in Azerbaijan to introduce or improve their anti-corruption and ethics courses, are also available to contribute to fulfilling training needs.

The ultimate goal of this important undertaking is to promote and advance the implementation of GRECO (Group of States against Corruption of the Council of Europe)’s and other outstanding international anticorruption recommendations in Azerbaijan and support the government’s efforts in preventing and fighting corruption.

This activity took place in association with the Partnership for Good Governance II Project on Strengthening Anti-Money Laundering and Asset Recovery in Azerbaijan (PGG II-AZ) which is funded jointly by the European Union and the Council of Europe and implemented by the Council of Europe.