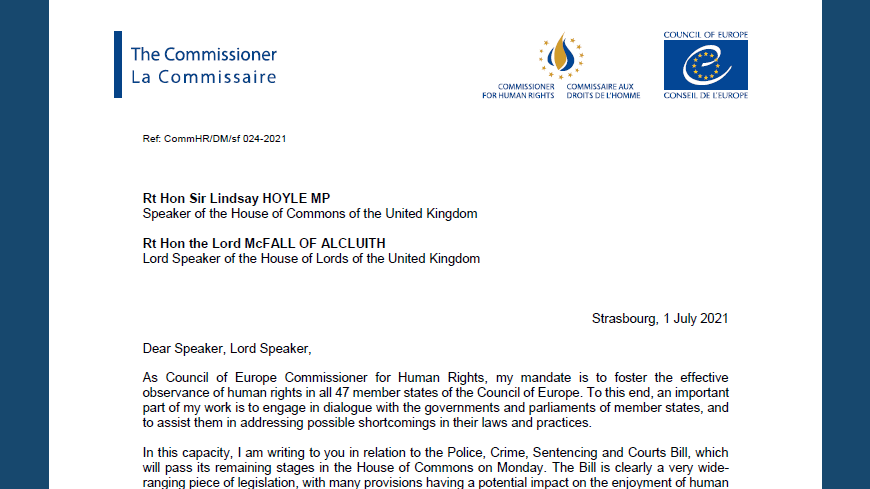 In a letter to the UK House of Commons and House of Lords, published today, the Commissioner urged parliamentarians to reject restrictions on peaceful demonstrations contained in the Police, Crime, Sentencing and Courts Bill. She also urges them to reject a new proposed criminal offence of trespass in case of unauthorised encampment, specifically affecting Gypsy, Roma and Traveller communities.

The Commissioner notes that new possibilities to impose conditions on demonstrations in England and Wales are “often broadly formulated”. This risks an arbitrary application and may be at variance with the rights to freedom of expression and freedom of peaceful assembly. The Commissioner highlights the importance of the right to peaceful demonstration in a democratic society, and the obligation of governments to facilitate the exercise of this right, as a legitimate way to express grievances, even when these are disruptive.

The Commissioner further notes the potential negative impact of the new criminal offence of trespass in relation to unauthorised encampments on Gypsy, Roma and Traveller communities leading a nomadic lifestyle, whose marginalisation has been exacerbated by the reduction of socially rented sites. Governments’ legitimate actions to prevent public disorder, crime or nuisance, should be clearly circumscribed, proportionate and non-discriminatory. The provisions proposed in the Bill seem to fail this test, including because of their far-reaching consequences of extended bans on returning to land and the seizure of property, including the vehicles in which people live. “The government should work with affected communities to find appropriate solutions, including ensuring the sufficient availability of publicly provided authorised sites”, said the Commissioner.