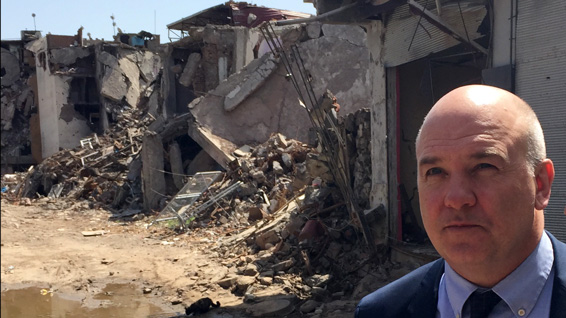 The Commissioner visiting the Sur district of Diyarbakir

“Respect for human rights has deteriorated at an alarming speed in recent months in the context of Turkey’s fight against terrorism” said Nils Muižnieks, the Council of Europe Commissioner for Human Rights at the end of a nine- day visit to Istanbul, Diyarbakir and Ankara. The topics of the visit were balancing security and human rights in the South East, freedom of expression and the administration of justice.

Recalling that Turkey had the right and duty to fight terrorism, the Commissioner unequivocally condemned all terrorist actions and violence targeting Turkish citizens and the state, including by the PKK and Daesh. "However, Turkey must avoid straying from human rights and rule of law principles in this fight, which would also ultimately serve the interests of these very organisations”.

The most striking feature of anti-terrorism operations since August 2015 has been the round-the-clock, open-ended and increasingly long curfews declared in entire neighbourhoods or cities in South-Eastern Turkey. “I have serious doubts about the legality of these curfews, a question yet to be examined by the Venice Commission, Turkey’s Constitutional Court and the European Court of Human Rights. An administrative decision based on a law that does not even mention the word ‘curfew’ is a very weak basis on which to impose such drastic restrictions of basic human rights, for a huge population and for months on end“.

Another crucial issue concerning anti-terrorism operations was proportionality: “While visiting the site of the murder of Tahir Elçi in Sur, I had a glimpse of the shocking scale of destruction in some of these zones. The government informed me that 50 terrorists were killed during the operations in Sur, yet at least 20 000 people were displaced, countless buildings were destroyed, and many civilians have undoubtedly suffered greatly because of terrorists and collateral damage”.

The Commissioner stressed that the Turkish State had the duty to conduct effective investigations into all lives lost during the operations, including civilians and security forces, but also suspected terrorists. “Unfortunately, I have heard allegations of serious shortcomings in these investigations, notably concerning the identification and interrogation of security personnel, and the collection of all evidence before the operation zones are cleared”. The Commissioner had been reassured that the Turkish authorities were taking allegations of racist and degrading behaviour by security forces very seriously, and urged them to ensure that disciplinary and judicial investigations also cover this aspect.

Long-standing problems concerning freedom of expression, arising from Turkish legislation and the practice of the judiciary, have also been severely exacerbated in this tense environment. “For example, the Academics for Peace have been subjected to both disciplinary and criminal proceedings for a statement calling for an end to violence, which in my opinion falls within the boundaries of free speech, whether one agrees or disagrees with their message” said the Commissioner. Recourse to an overly wide notion of terrorism to punish non-violent statements and criminalisation of any message merely coinciding with the perceived interests of a terrorist organisation were not new in Turkey, but the scale had become alarming.

A similar exponential increase concerned the offence of insulting the President of the Republic, which accounted for 1845 criminal proceedings. “I have not encountered such abusive application of a similar provision in any of the other 46 member states of the Council of Europe, including those where insulting the president is still considered a separate criminal offence”. The Commissioner also pointed to the huge increase in the number of blocked websites since his predecessor’s visit in 2011, and to the fact that Turkey holds the world record for Twitter takedown requests.

Referring to his meeting with Can Dündar during the visit, the Commissioner stated that treating the publication of true information of genuine public interest as a form of espionage was “simply a threat to journalism as a profession”. The takeover of newspapers and TV stations by trustees was also a very dangerous precedent according to the Commissioner: “by law, these trustees are supposed to safeguard assets, but they changed editorial policy, causing the loss of readership and ruining the market value of the companies. This is an extremely worrying precedent which has already done irreparable harm to media freedom and pluralism in Turkey, even before a final court judgment”.

According to the Commissioner, the intolerance of the executive and the judiciary to legitimate criticism had led to a very palpable chilling effect and self-censorship, and reduced the scope of democratic discussion in the country.

A striking feature was the fact that many of these problematic measures had been taken by “criminal judges of peace”. “While I intend to examine more closely the practice of these judicial formations, which were supposed to improve the protection of human rights in criminal proceedings, there are strong indications that they may be having exactly the opposite effect. They seem to have caused many violations in their own right” said the Commissioner. He also shared the concerns of other Council of Europe bodies, the Venice Commission and the Group of States against Corruption (GRECO), that the fight against a presumed terrorist organisation within the judiciary may have weakened its independence. “The Turkish President’s recent statement about the Constitutional Court, as well as other statements by politicians, have also damaged public trust in the independence of the judiciary”.

Finally, the Commissioner raised the issue of human rights defenders and lawyers, mentioning in particular stigmatizing rhetoric, smear campaigns and ongoing investigations against them. “In a context where there is a lot of misinformation, manipulation and conflicting opinions, in particular as to what happened during the curfews, a transparent judicial process which relies on human rights defenders is the main hope for establishing the truth and obtaining redress”. Against the same background, the recent political attacks against NGOs, merely for writing reports, were also a very disturbing development.

“I have had many fruitful discussions with the Turkish authorities on these issues. My job here, as in other European countries combating terrorism, is to raise these difficult questions to assist the authorities in finding the right balance between security and human rights” said the Commissioner.