Time to cure amnesia about the history of Roma in Europe 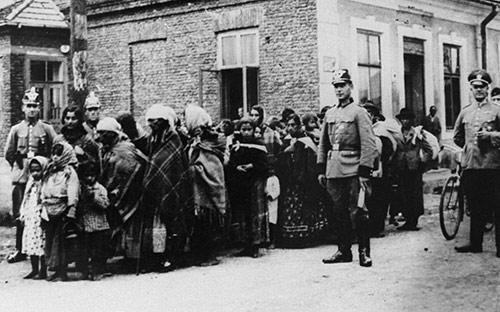 In a few days, we will commemorate the liquidation 71 years ago of the so-called “Gypsy family camp” at Auschwitz-Birkenau. On 2 August 1944, 2 897 persons were taken to the gas chambers and exterminated. Only a few months earlier, on 16 May 1944, the detainees of the “Gypsy camp” had refused to obey the orders of the SS soldiers who had come to kill them. Knowledge about both the Roma uprising and the liquidation of the “Gypsy camp” remains limited in European societies today.

Knowledge of Roma history in Europe is crucial to understanding their current situation. Although many people I have encountered have views about Roma, few know anything about their history.  Most people do not know, for instance, that Roma were banned from the Holy Roman Empire in 1501 and, as of this date, could be caught and killed by any citizen. In France, Louis XIV decreed in 1666 that all Gypsy males should be sent for life to galleys without trial, that women should be sterilised and children put into poorhouses. In Spain, it was decided in 1749 to detain all Roma in an operation known as the “Great Gypsy Round-Up”. In part of what is now Romania (Wallachia and Moldova), Roma were enslaved between the 14th century and 1856. The Austro-Hungarian Empress Maria Theresia imposed a fierce assimilation policy involving the removal of children from the care of their parents.

In more recent times, Roma and Yenish children were forcibly removed from their families in Switzerland, on grounds that their parents would not be able to educate them as good citizens. Similarly, it remains largely unknown in France that Roma who had been detained in camps on French territory during the Second World War were in some cases kept in detention in miserable conditions until the end of 1946, or that Roma survivors of the Nazi concentration camps were left without any support and deprived of nationality long after 1945.

The Roma “Pharrajimos” -the Roma Holocaust- carried out during the Second World War was a culmination of these policies of exclusion, elimination and forced assimilation. About 90% of the Roma population of some countries disappeared as a result of massacres and deportations to concentration camps. However, 70 years after the end of the Second World War, memory work regarding the fate of the Roma is still incomplete. In my report on the Czech Republic (2013) for example, I recalled that a pig farm is still present on the site of the former Lety labour camp, in which Roma were detained during the Second World War and then deported to Auschwitz.

It is also deeply worrying that some mainstream politicians, in a context of growing populism in Europe, have publicly allowed themselves to condone the Roma Holocaust. In addition to trivialising some of the most horrendous human rights violations of the past, such discourse strengthens and legitimises present-day anti-Roma racism.

Keeping in mind this tragic past helps to understand why some Roma may find it difficult to trust majority societies and public institutions today. One cannot disregard the heavy legacy of past practices of forced sterilisation, removal of children and ethnic profiling in current relations between Roma communities and the police or state administrations in general.

The forced sterilisation of Romani women has long been a practice in several countries, with eugenic rhetoric around a supposed “threat of Roma population growth” providing the bedrock for this gross human rights violation. Cases are still sporadically reported in the 21st century. Sweden and Norway have recently established commissions in order to investigate past abuses, including forced sterilisation, and to promote redress and reconciliation. The Czech government presented apologies to forced sterilisation victims in 2009. However, other countries have not yet acknowledged their responsibilities, provided adequate redress to victims or sanctioned those responsible for this human rights violation.

A certain continuity from past to present can also be discerned in relation to the removal of Roma children from their families, a long-standing practice aimed at eradicating Roma culture. While various countries have recognised that this was wrong, the number of Roma children placed in state care remains disproportionately high in many others. During my visits to Romania, Bulgaria and Norway, I found that Roma children often appear to be placed in care on grounds of the socio-economic situation of their family, a practice that is at variance with the case-law of the European Court of Human Rights.

Moreover, Roma have in many countries been subjected to constant ethnic profiling by the police for alleged purposes of crime prevention, protection of health and safety or migration control. Since the Second World War, the practice of recording Roma in special files has had a particularly negative undertone for the Roma. However, it has often resurfaced. In Italy, for instance, a census of Roma living in camps for so-called “nomads”, which included the taking of fingerprints, was carried out in 2008.  In 2014, the keeping by the police in Southern Sweden of a file with the names of more than 4 000 Roma raised considerable alarm.  Ethnic profiling has also been used to impose undue freedom of movement restrictions on Roma, as highlighted in the Issue Paper I published in 2013 on the right to leave a country.  This document reports exit denials and passport confiscation practices targeting citizens of alleged Roma ethnic origin in some Western Balkan countries in order to prevent them from travelling abroad.

Long-standing practices of police control also have enduring consequences on the legal situation of Roma. During my visit to France, I expressed concerns about the fact that French Travellers were still subjected to exceptional legal arrangements and the obligation to carry an internal travel permit, as a consequence of policies dating back to the beginning of the 20th century. I welcome the ongoing process of legislative reform aimed at eliminating these travel permits and other discriminatory provisions. The persistence in several countries of statelessness among Roma communities also carries disturbing echoes of earlier bans depriving Roma of all rights.

Lastly, it is important to remember that the widespread policies of evictions, expulsions and segregation to which Roma are routinely subjected in many European countries are also a continuation of past policies aimed at getting rid of them or at keeping them under tight control. I raised these major human rights concerns in the Czech Republic, France, Italy, Portugal, Romania and “the former Yugoslav Republic of Macedonia”.

This history of exclusion and persecution of the Roma in Europe, but also their contribution to European history and culture, must be brought to light so as to replace age-old myths and deeply-rooted prejudices with a narrative grounded on sound knowledge and understanding of the past. It is not only a matter of respect and justice, but also an essential tool to combat growing anti-Gypsyism.

Important moves have been made by policy-makers in several member states: in 2015 the Norwegian Prime Minister offered an apology to the Oslo Roma for Second World War policies; and in May 2015, the French President honoured the memory of the Roma detainees of the Struthof concentration camp situated near Strasbourg. Memorials for Roma victims of the Second World War have been erected in various places.  Several German Länder have signed cooperation agreements with the Sinti and Roma community in which the Roma Holocaust is specifically mentioned. The Swiss Government offered apologies to victims who were forcibly placed as children and has recently expressed its readiness to provide them with reparation. The European Parliament adopted a resolution in April 2015 acknowledging “the historical fact of the genocide of Roma that took place during World War II” and proposed to recognise the 2nd of August as the European Roma Holocaust Memorial Day, a step already taken by some member states.

The truth and reconciliation commissions recently established in Sweden and Norway could show other countries the way forward for the recognition of historical crimes and help promote reconciliation between communities. The views of the Roma communities themselves on their own history should at long last be heard.

The Council of Europe has elaborated Factsheets on Roma history aimed at improving reflection of Roma history into the wider teaching of European history. They should be used more widely in the educational systems of member states.

The proposed establishment of a European Roma Institute could also contribute to making sure the past is not forgotten and increasing knowledge about history and culture.

As highlighted by Vaclav Havel, the late Czech President, in his 1995 speech at the ceremony of unveiling of a memorial to the Roma victims of the Lety camp, “this is not about a separate history of the Roma. This is the history of all the occupants of this territory, our shared history. It must be identified, understood, and then never forgotten.”

Right to remember: CoE Handbook for education with young people of the Roma Genocide