The Commissioner calls on the Russian investigating authorities to take urgent action in the case of Mr Salman Tepsurkayev, abducted in September and subjected to torture in Chechnya 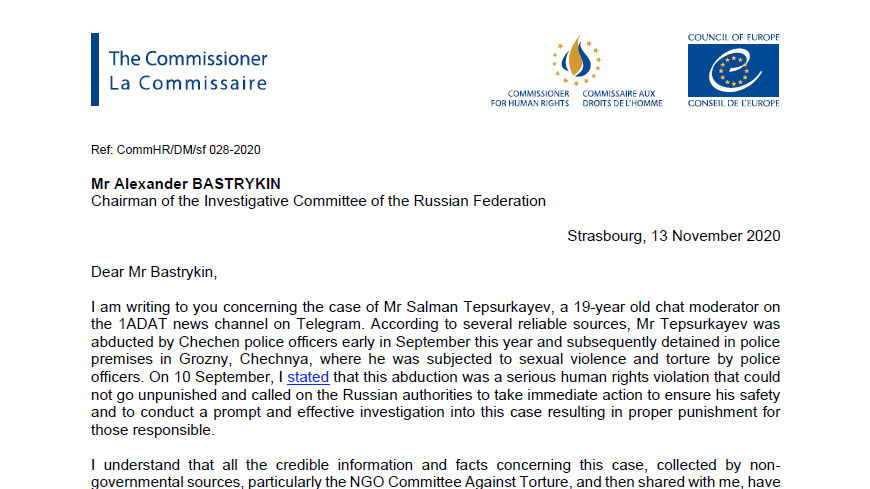 Today the Commissioner published a letter she had addressed to the Chairman of the Investigative Committee of the Russian Federation, Mr Alexander Bastrykin, concerning the case of Mr Salman Tepsurkayev, a 19-year old chat moderator on the 1ADAT news channel on Telegram who was abducted, allegedly by Chechen police officers, early in September.

Reliable sources report that Mr Tepsurkayev was detained in police premises in Grozny, Chechnya, where police officers subjected him to sexual violence and torture.

The Commissioner expresses serious concerns about the fact that, more than two months after the abduction, Mr Tepsurkayev’s whereabouts are still unknown. “Urgent action should be taken to prevent his enforced disappearance, and to ensure that he is safe and his rights are properly safeguarded”, writes the Commissioner, stressing that it is also of paramount importance to combat impunity for serious human rights violations - a systemic problem that has been prevalent in Chechnya for many years.

Against this background, the Commissioner asks the investigating authorities of the Russian Federation to inform her about any action taken to establish the whereabouts of Mr Tepsurkayev and ensure his safety. She also asks to be notified about the progress of the investigations into the case.