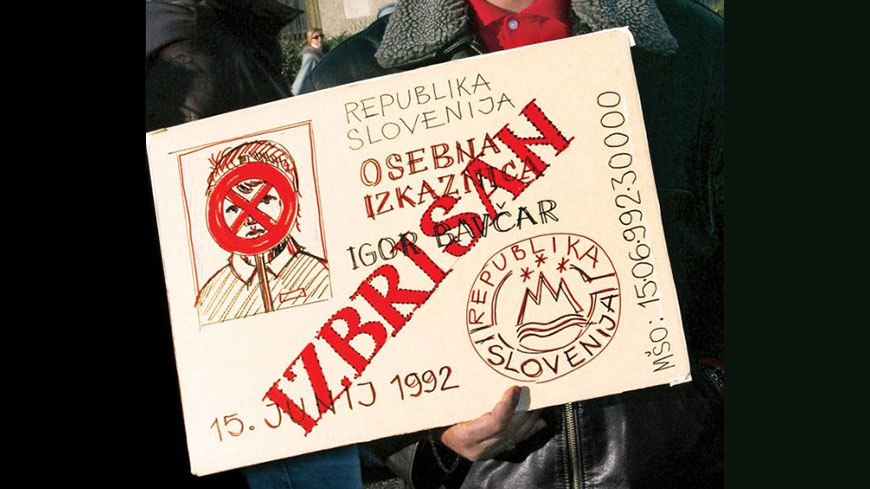 “The apology extended today by Slovenian President Borut Pahor on behalf of the state and himself to the “erased”, 30 years after their removal from the official residence registry, is a welcome and meaningful step. It helps remedy past wrongs, foster reconciliation and prevent similar human rights violations in the future. I am particularly pleased that some of the affected persons were consulted in advance of formulating the state apology,” said today the Council of Europe Commissioner for Human Rights, Dunja Mijatović.

25671 persons were affected by the “erasure” because they did not apply for Slovenian citizenship after Slovenia’s declaration of independence in 1991. Without legal status, these people were deprived of their economic, political, and civil rights and lost their jobs, homes, pensions, as well as access to health services, and social benefits, without legal remedy. Many left Slovenia and were denied re-entry, while others stayed in a legal limbo in the country.

“Official apologies are not mere words. A sincere expression of regret on behalf of public institutions is often indispensable - next to other legal and financial remedies - for victims to achieve closure and regain trust. State apologies are key to acknowledge the gravity of what happened, and to influence a society’s perception of the victims,” the Commissioner added.

Today’s state apology comes in complement of other commendable steps taken by the Slovenian authorities in recent years to address the human rights violations suffered by the “erased”. In execution of the 2012 Kurić and others v. Slovenia judgment of the European Court of Human Rights, the Slovenian authorities have enabled a considerable number of “erased” to regularise their legal status and to obtain compensations.

“Following the apology issued today, I call on the Slovenian government to provide a simplified and efficient process of regularisation for the small number of “erased” who still live in Slovenia without legal status. Equally important is to include substantial information and analysis about the “erased” in the school curriculum, as well as to make such information available to the wider society, as a way for the Slovenian nation to tell a more complete story of its past”, concluded the Commissioner.