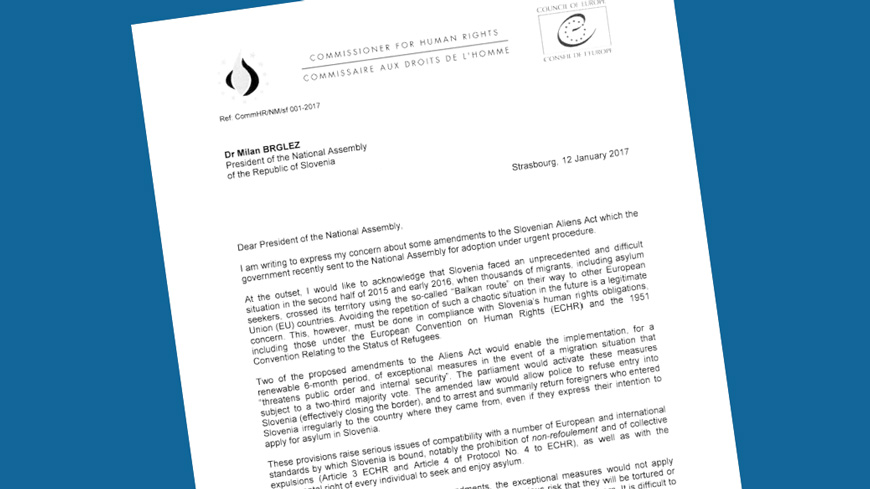 “Slovenian parliamentarians should reject amendments to the Aliens Act that are contrary to international human rights and refugee protection standards by which Slovenia is bound”, said today Nils Muižnieks, Council of Europe Commissioner for Human Rights, while releasing a letter addressed to the President of the National Assembly of Slovenia.

Two of the proposed amendments recently introduced by the Government would allow the police to refuse entry into Slovenia and to arrest and summarily return foreigners who entered the country irregularly, even if they express the intention to apply for asylum in Slovenia. The parliament could activate these measures for a renewable 6-month period in case of a change of the migration situation in Slovenia that “threatens public order and internal security.”

“These provisions are contrary to Slovenia’s legal obligations under the European Convention on Human Rights, which unequivocally prohibits refoulement and collective expulsion of foreigners, and to the case-law of the European Court of Human Rights, which affirms that member states have the legal duty to provide adequate procedures and remedies for the effective and individual assessment of protection needs of migrants”, said Commissioner Muižnieks.

“Slovenia has a legitimate concern to manage the migratory flows at its borders, but this must be done in a manner that upholds the human rights of migrants, including every individual’s right to seek and enjoy asylum if they have protection needs.”

“If adopted, these measures would not only tarnish Slovenia’s image as a country fully committed to human rights, but they would also risk provoking a domino effect in the region”, Commissioner Muižnieks added.