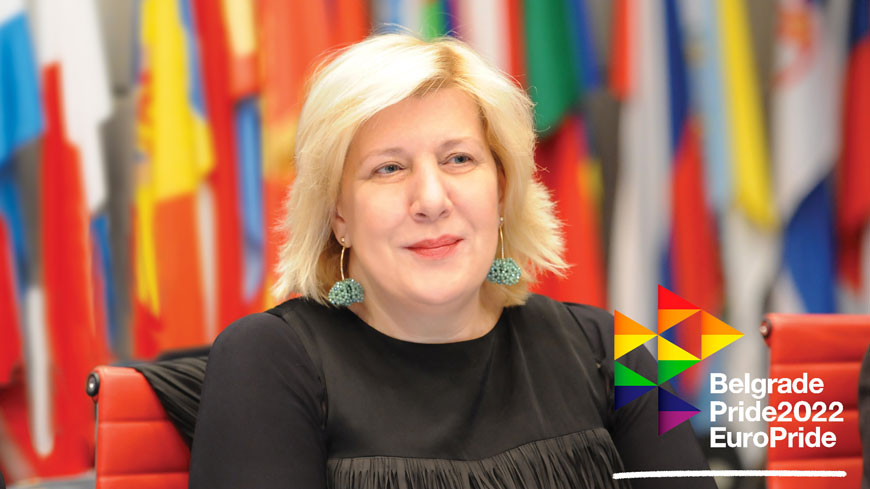 “It is highly regrettable that the Serbian authorities have decided to ban the Europride march scheduled for 17 September. Weeks of uncertainty concerning the holding of this march have sent a wrong message to the public and made space for hateful rhetoric and more threats against LGBTI people, including from religious leaders”, said today the Council of Europe Commissioner for Human Rights, Dunja Mijatović.

“I welcome President’s Vucic recent statement on the importance of recognizing and respecting the human rights of LGBTI people and urge the Serbian authorities to ensure that those who will walk for equal human rights and dignity can do so safely. Serbia must respect its human rights obligations and uphold freedom of peaceful assembly and freedom of expression for all, without discrimination.”

Freedom of peaceful assembly and of expression stand at the core of a free, inclusive and pluralist democracy, where everyone can enjoy their human rights equally and safely, and societal issues are discussed through peaceful dialogue. As consistently repeated in the case-law of the European Court of Human Rights, states have the obligation, to the greatest extent possible, to facilitate the holding of peaceful assemblies. “I find it highly concerning that the Europride march is facing such a level of obstruction from the authorities, while other events and massive gatherings are constantly taking place freely and safely in the streets of Belgrade.”

In cases raising similar issues, the European Court of Human Rights, has ruled that states have the obligation to take preventive measures to neutralise risks of violence against an assembly and must ensure the security of participants. They must also ensure that that the time, place and manner of conduct of an assembly are such that allow the participants to convey their message within sight and hearing range of their intended target audience. “Instead of bowing to threats and hate by banning the Europride march, the Serbian authorities have the responsibility to ensure that everyone in society can exercise their right to enjoy the same freedoms and is equal in dignity.”

“As I have stressed in my conversations with the Serbian authorities at the highest level over the past two weeks, the fact that Europride takes place in Serbia this week is also of great significance for the south-eastern European region, where much still needs to be done to combat discrimination and hate against LGBTI people. Hosting Europride sends the signal that the march toward equality is in progress. It is positive that Pride marches have taken place peacefully in recent years in Belgrade, Sarajevo, Tirana, Podgorica and Skopje and I call on the Serbian authorities to be on the right side of history by enabling a peaceful and safe Europride march this Saturday.”