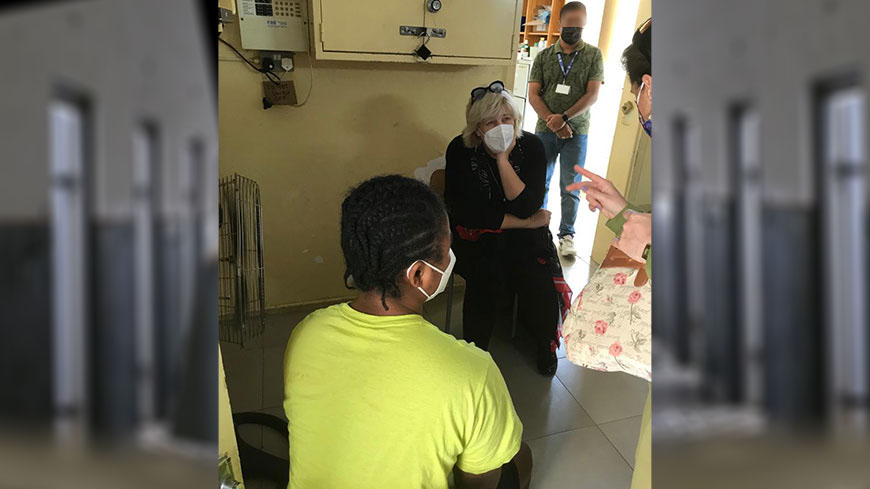 Commissioner Mijatović met with migrants at the Safi Detention Centre

“Implementing the recommendations of the public inquiry report which found that the state must bear responsibility for Daphne Caruana Galizia’s assassination should be a top priority for the government”, said today the Council of Europe Commissioner for Human Rights, Dunja Mijatović, following a visit to Malta from 11 to 16 October.

“The authorities should swiftly start putting in place the far-reaching reforms needed to ensure journalists’ safety and address mistrust in the media in Malta. This should begin with a co-ordinated response to threats and harassment against journalists, including online, in order to provide adequate protection measures. Enhanced awareness-raising among the police and dialogue between law enforcement and media professionals are vital in this respect”, she added. In addition, this should be strengthened by a proper implementation of the Freedom of Information Act to ensure that journalists have access to accurate and timely information.

Recent initiatives to address the problems arising from the use of vexatious lawsuits, commonly known as SLAPPs (strategic lawsuits against public participation), are encouraging. The Commissioner reiterated her previous recommendations to the Maltese authorities to ensure that relevant legislation is adopted without delay.

Concerning the human rights of refugees, asylum seekers and migrants, the Commissioner stressed that the human rights of those in distress at sea should never be put at risk.  Particularly, the authorities should ensure that their actions do not lead, either directly or indirectly, to returns to Libya, which is not a safe place for disembarkation.

The Commissioner visited the Safi Detention Centre and two open centres in Hal Far, where she discussed with representatives of the responsible authorities and with a number of asylum seekers and migrants. While noting the recent efforts made to improve living conditions in these centres, the Commissioner was struck by the deplorable situation in Block A in the Safi Detention Centre. She strongly urged the authorities to take immediate action to ensure dignified conditions for all those currently held there.

Although the number of those detained, including children, was significantly reduced recently, the Commissioner observed that uncertainties remain about the legal grounds and the safeguards related to some detention measures. “I call on the authorities to focus on investing in alternatives to detention and to ensure that no children or vulnerable persons are detained.” The Commissioner also stressed the need to ensure independent monitoring of places of detention as well as unhindered access for NGOs to provide support and assistance to those detained.

Regarding women’s rights, the Commissioner called on the Maltese authorities to step up measures to enhance equality between women and men. “In order to improve gender equality, the authorities must put in place comprehensive measures to overcome prejudices and traditional and all other practices based on the idea of the inferiority of women or on stereotyped roles for men and women. Awareness-raising among the general population and the introduction of mandatory comprehensive sexuality education are key”.

Noting that Malta’s legislation, which provides for a total ban on abortions, remains one of the most restrictive among Council of Europe member states, the Commissioner called on the authorities to urgently repeal provisions criminalising abortion and ensure all women’s access to sexual and reproductive health care, including safe and legal abortion care. She welcomed the developing debate on this issue but stressed that “the fact that abortion is still criminalised and stigmatised not only puts Maltese women’s health at risk, but also affects their equal enjoyment of other human rights”.

Lastly, the Commissioner welcomed the recent adoption of a bill aimed at achieving gender balance in Parliament and encouraged the authorities to take further steps to advance women’s representation in leadership roles and in decision-making positions in political bodies at all levels.

During her visit the Commissioner met with the Prime Minister of Malta, Robert Abela, the Deputy Prime Minister and Minister for Health, Christopher Fearne, the Minister for Home Affairs, National Security and Law Enforcement, Byron Camilleri, the Minister for Equality, Research, Innovation and the Co-ordination of the post-COVID-19 Strategy, Owen Bonnici, the Minister for Justice and Governance, Edward Zammit Lewis, the Attorney General, Victoria Buttigieg, the Ombudsman of Malta, Anthony C. Mifsud, representatives of national human rights structures, as well as with members of civil society, media organisations and international counterparts.

The Commissioner’s report on her visit is upcoming.