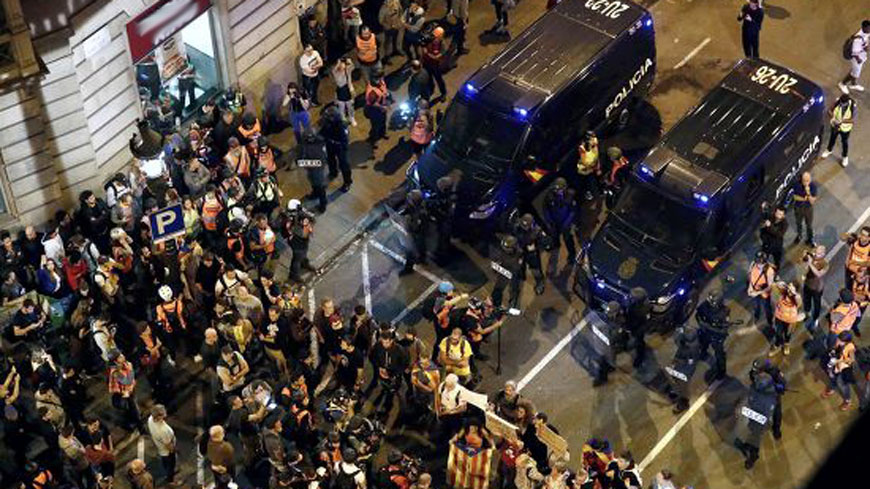 I am concerned at numerous reports of attacks against journalists covering demonstrations in Catalonia last week. The Council of Europe Platform for the safety of journalists has recorded 37 such instances. While some of these attacks have been carried out by demonstrators, several accredited journalists, wearing press visibility jackets, have reportedly experienced violent behaviour at the hands of police officers in different cities of Catalonia. Some journalists indicate that they were beaten up or had their equipment broken, others that they were hit by foam bullets shot by the police. I also take note of the arrest of a press photographer in the evening of Friday 18 October in Barcelona, while he was reportedly taking pictures of a police operation.

In general, I am worried about a context of growing insecurity for journalists reporting on the situation in Catalonia in recent months, with attacks against journalists on the rise.

In the current tense situation, ensuring full respect for freedom of expression, which includes the right to receive and impart information, is key. I therefore call on the Spanish authorities to investigate all reported cases of attacks against journalists, notably during last week’s demonstrations, whether they were carried out by police officers or demonstrators. Measures should also be taken to guarantee the safety of all journalists during demonstrations.

I am also concerned about allegations of disproportionate use of force and inappropriate use of anti-riot weapons by the police on demonstrators during last week’s protests. I fully acknowledge the numerous challenges faced by police officers who had to confront violent attacks and deal with numerous acts of vandalism on the streets and who have also sustained injuries as a result. I strongly condemn these manifestations of violence and call on everyone to feel responsible and play their full role in de-escalating tensions, by rejecting violence and showing restraint.

However, even in such difficult circumstances, it is important for the police to strictly abide by the principles of necessity and proportionality in the use of force, in order to safeguard the rights of those who demonstrate peacefully and defuse tensions at the same time. I note in particular from several reports, including from Amnesty International, that improper use has been made of weapons such as rubber and foam bullets. I understand that at least four persons suffered serious eye injuries during last week’s demonstrations due to such weapons. As already stressed by my predecessor in a letter to the Spanish authorities of 4 October 2017, the use of such weapons presents a clear danger for the safety of demonstrators. Because of their imprecise and indiscriminate effect, they should not be used against large numbers of persons, including assemblies gathering large numbers of peaceful protesters.

Therefore, I urge the Spanish authorities to reconsider the use of these weapons in operations aimed at managing public demonstrations. They should also investigate and adequately sanction all reported instances of abusive use of force by law enforcement officials.

I will continue to engage with the Spanish authorities on how to ensure protection of freedom of expression and peaceful assembly.