Maintaining public order and freedom of assembly in the context of the “yellow vest” movement: recommendations by the Council of Europe Commissioner for Human Rights 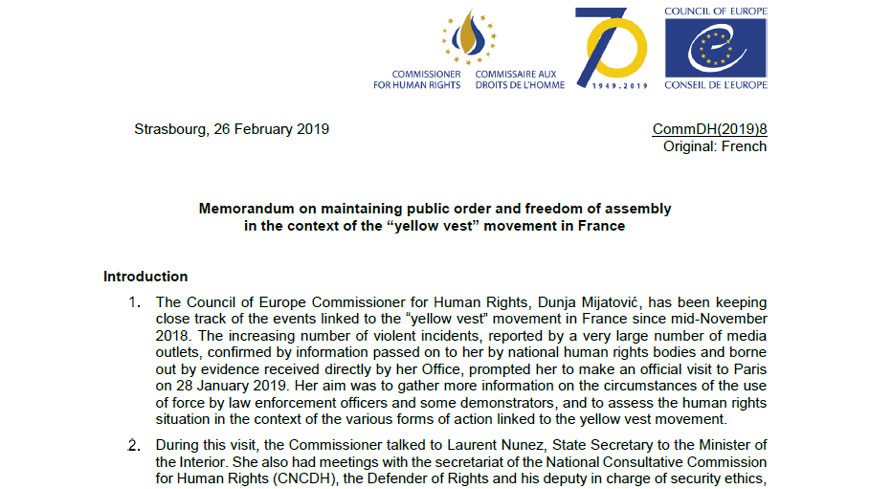 In a memorandum containing her observations on the events linked to the so-called yellow vest movement, the Council of Europe Commissioner for Human Rights, Dunja Mijatović, invites the French authorities to show more respect for human rights during operations aimed at maintaining public order and refrain from introducing excessive restrictions to freedom of peaceful assembly through the bill on strengthening and guaranteeing public order at demonstrations.

While strongly condemning the racist, anti-Semitic and homophobic comments and assaults by some demonstrators, the Commissioner points out that the main task of law enforcement officers is “to protect citizens and their human rights”. However, she considers that the number and seriousness of the injuries inflicted on demonstrators “raise questions about the compatibility of the methods used in operations aimed at maintaining public order with due regard for these rights”.

The Commissioner encourages the authorities to publish more detailed figures on the wounded and to review the doctrine on the use of intermediate weapons as soon as possible. Pending this review, the authorities “should suspend the use of LBDs [rubber bullet launchers] during operations aimed at maintaining public order”, she said, while also emphasising the duty of the authorities to guarantee the safety of journalists.

She underlines the importance of avoiding impunity with regard to police violence so that all breaches of professional ethics and criminal law by law enforcement officers are punished, and invites the authorities to ensure that “all persons claiming to be the victims of such misconduct may not only report it to the General Inspectorate of the national police and of the gendarmerie and to the Defender of Rights, but also bring a complaint in court and claim compensation”.

The Commissioner notes that operations aimed at maintaining public order are particularly complex and that the officers who have been mobilised are working in a context of high tension and fatigue. She strongly condemns the violence committed against law enforcement officers, regrets the large number of wounded among their ranks and highlights the importance of paying them a sufficient salary and granting them adequate periods of rest and recuperation, together with appropriate psychological support and sound human rights training throughout their career.

The Commissioner also invites the authorities in charge of legal proceedings in the context of the yellow vest movement to show due care and restraint in their use of immediate summary proceedings and recommends that hearings should not be held at night.

As to the arrangements for exercising freedom of peaceful assembly, the Commissioner is concerned about the taking in for questioning and custody of persons wishing to go to a demonstration when no offence was identified and no proceedings were brought subsequently. She considers that such practices constitute serious interferences with the exercise of the freedom of movement and the freedoms of assembly and expression, and invites the authorities to comply scrupulously with the requirement to ensure that any such restriction is strictly necessary, and to avoid using such procedures as preventive law enforcement tools.

The Commissioner also invites France’s lawmakers to ensure that the law on strengthening and guaranteeing public order at demonstrations fully respects the right to freedom of assembly. For this purpose, she recommends that the introduction of an administrative ban on demonstrating should be avoided as this would constitute a serious interference in the exercise of this right, especially as there is already provision in the Internal Security Code for the judicial authorities to impose a ban on demonstrating.

While sharing the authorities’ desire to make it possible to identify the perpetrators of violence, the Commissioner recommends that they abandon the plans to make hiding all or part of one’s face in or within the vicinity of a demonstration “without a legitimate reason” a more serious offence (délit). She also recommends dropping the idea of extending the scope of the supplementary penalty of a ban on demonstrating to the offence of failing to notify a demonstration and that the possibility of lightening the formalities for notifying demonstrations be explored.

Lastly, the Commissioner invites the government and the senators to refrain from reintroducing the proposal, dismissed by the National Assembly, to enable prefects to order searches and frisking within the vicinity and on the edges of demonstrations.

The recommendations contained in the memorandum are based on the visit made by the Commissioner to Paris on 28 January to gather more information on the circumstances of the use of force by law enforcement officers and some demonstrators during various forms of action linked to the yellow vest movement.