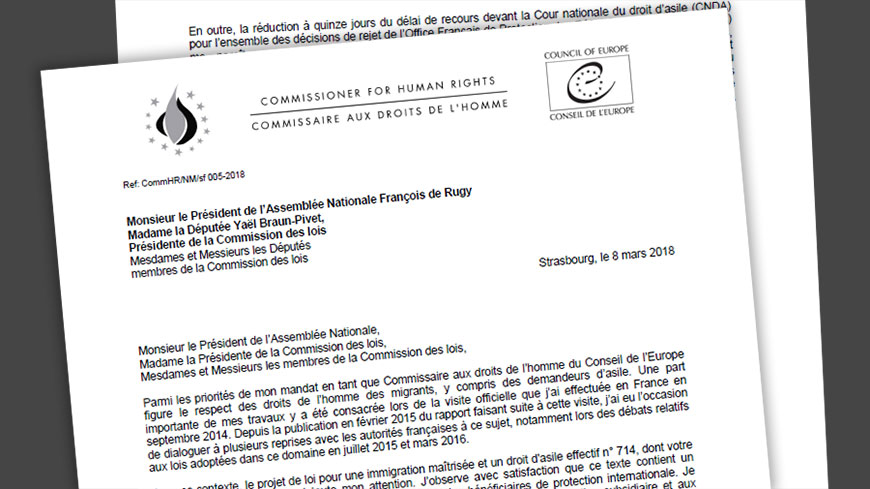 In a letter to members of the French National Assembly, published today, the Commissioner expresses concern at the risk of violations of the rights of migrants, including asylum seekers, if the provisions of the draft law for managed immigration and an effective right to asylum are passed as they stand.

While welcoming a number of measures securing the right of residence of refugees and beneficiaries of subsidiary protection, the Commissioner is concerned about the proposal to reduce the deadline for submitting asylum applications to 90 days. Given the many obstacles faced by asylum seekers when they arrive in the country, this deadline may be difficult to comply with. He also considers that the processing under an accelerated procedure of asylum applications filed after the expiry of the proposed deadline will not take into account the vulnerability of asylum seekers and the complexity of their cases.

The Commissioner also considers that the proposal to reduce the deadline for appeals to the National Asylum Court (CNDA) to 15 days casts doubt on the effectiveness of this remedy. Full effectiveness presupposes that a remedy is both available and accessible not only in law but also in practice. He is also concerned about the abolition of the automatically suspensory nature of appeals lodged with the CNDA by certain categories of asylum seekers. In this connection, he points out that the European Court of Human Rights found against France in 2012 because of the non-suspensory nature of appeals before the CNDA under the procedure described at the time as “priority”.

Finally, the Commissioner calls on members of the National Assembly to take the opportunity of discussing this draft law in order to reform the provisions on the facilitation of unauthorised entry and residence so that there is no longer any deterrent or obstacle to much needed solidarity with migrants.

Read the Commisisoner's letter addressed to the French National Assembly

Read the reply of the French president of the National Assembly