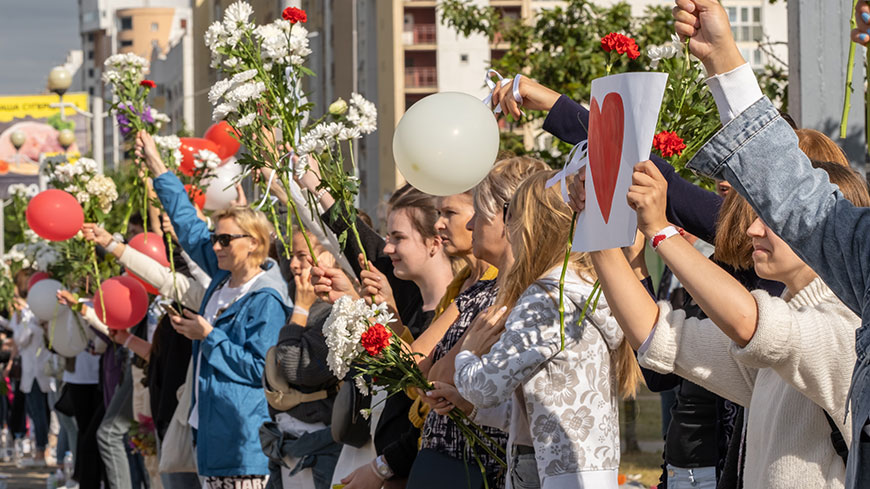 More than a month after the beginning of mass protests following the presidential elections in Belarus, the human rights situation in the country remains extremely worrying. Thousands of peaceful protesters have been arrested, and several individuals have been reported missing. Yet, non-violent demonstrations have continued across the country. Belarusian women have emerged as key voices of dissent in Belarus and an inspiration for many around the world. Often holding flowers, women have become a symbol of the peaceful nature of protests, marching together every week despite the violence used by law enforcement officials trying to stop their demonstrations through dispersal and arrests. Last Saturday in Minsk, Belarus law enforcement officials summarily arrested and detained hundreds of women protesters, taking their fingerprints and photos before releasing them.

Belarus is not a member state of the Council of Europe,[1] but like any other country it should not overlook the fact that it is bound by international human rights law and obligations, and it bears full responsibility for human rights violations, especially when committed systematically and on a large scale. The prohibition of torture and ill-treatment is absolute and peremptory in nature and imposes a number of specific obligations on all states, including Belarus.

Regrettably, numerous sources, including human rights defenders, medical records and witness statements, indicate that Belarusian law enforcement officials have systematically and deliberately subjected hundreds of individuals to ill-treatment while in detention, which is sometimes unacknowledged or incommunicado. In many cases the ill-treatment was reported to be of such a severe nature that it would amount to torture in various forms. There have been reports of beatings resulting in broken bones, electric shocks, sexual violence and rape. Journalists, civil society activists and human rights defenders have been prevented from carrying out their work, often being subjected to physical attacks, arbitrary arrests, detention and judicial harassment by the Belarusian authorities. Their legitimate civic space has also been restricted, including through internet blocking.

This must stop immediately. Under international human rights law, Belarus is duty-bound to carry out a prompt, transparent and independent investigation of all allegations of torture and ill-treatment and punish those responsible regardless of whether they were acting in their official capacity. All victims of serious human rights violations should have access to an effective remedy and to justice. This duty is owed not only to victims and their relatives but also to society as a whole, as there can be no peace without justice and proper respect for human rights.

According to the UN Basic Principles and Guidelines on the Right to a Remedy and Reparation for Victims of Gross Violations of International Human Rights and Serious Violations of International Humanitarian Law (2005), victims should be provided with rehabilitation. To be effective, the rehabilitation process should be geared to the specific needs of a victim and include medical, psychological, social, educational and other relevant aspects. Some Belarusian victims have fled to Council of Europe member states and more might arrive if the human rights situation does not improve soon. I therefore call on Council of Europe member states to assist Belarusian victims of torture and all those in need of protection who arrive on their territories.

Preventing further human rights violations, particularly in places of detention, is another crucial step that should be taken immediately. Civil society can play a key role, particularly by ensuring independent monitoring of detention centres and providing legal aid to detainees. I have learnt with great concern that lawyers and human rights defenders have faced obstacles in accessing persons deprived of their liberty in many detention centres in Belarus and that the authorities have refused to provide information about detainees on many occasions. I call on Council of Europe member states to continue showing solidarity with civil society, journalists and human rights defenders in Belarus in their efforts to monitor and report on the current human rights situation in Belarus. The latter should be able to carry out their crucial work in a safe and enabling environment without hindrance, fear or reprisals. I encourage Belarus to join the European Convention for the Prevention of Torture, which is open to non-member states, as it establishes a monitoring mechanism based on inspections of places of detention, which can help states to comply fully with the European human rights standards in this sphere.

The Belarusian authorities bear the main responsibility for stopping the serious human rights violations committed on their territory and providing redress for all victims. At the same time, the international community, including the Council of Europe, can play an important role by pooling their efforts to ensure that these violations are halted and do not go unpunished. I welcome all the steps taken recently in this respect at European and international level, particularly the launch of the OSCE Moscow Mechanism for Belarus.

In recent weeks, the Council of Europe and its member states have publicly supported Belarusian society’s peaceful calls for more democracy and human rights. For my part, as the Council of Europe Commissioner for Human Rights, I wish to express my support and my sympathy to all of Belarus’s courageous human rights defenders, journalists and citizens in these challenging times. I stand ready to offer my advice and co-operate with European and international institutions to protect our shared human rights values effectively throughout Europe, including Belarus.

[1] The Council of Europe objective is the rapprochement and accession of Belarus based on the Organisation’s values and principles. Belarus has been co-operating with the Council of Europe in a number of fields, including in the context of the Action Plan for Belarus 2019-2021 and several Council of Europe Conventions and Partial Agreements, with a view to bringing the country’s legislation and practice closer to European standards, in order to strengthen the rule of law and promote human rights and democratic principles of governance. Various Council of Europe institutions, including the Commissioner’s Office, have also been co-operating with Belarusian civil society on many human rights issues over recent years.