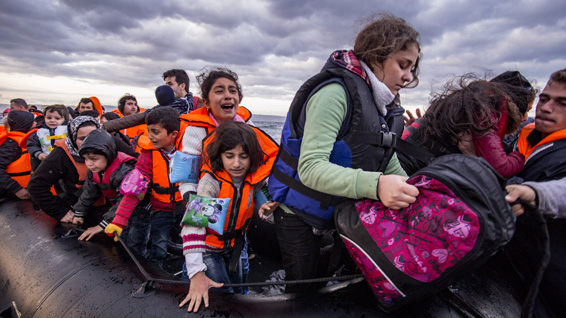 Female migration is not a new phenomenon but it is increasing, as is female refugees’ and migrants’ vulnerability to human trafficking, exploitation, discrimination and abuse. Single women travelling alone or with children, pregnant and nursing women, adolescent girls, and elderly women are among those who are particularly at risk and require a coordinated and effective protection response. Estimating that the current response to refugee and migrant women and children’s needs by governments, humanitarian actors and EU institutions has been insufficient, human rights organisations, including the United Nations High Commissioner for Refugees (UNHCR) and women’s rights organisations, have called for immediate action.

The hardship facing refugee and migrant women and girls

Many of these women and girls flee countries such as Syria and Afghanistan, where they were subject to persecution and sexual and gender-based violence, including war-related violence. Once uprooted, they hope to find safety and protection in neighbouring countries. However, in some of those countries they continue to experience human rights violations and discrimination. Amnesty International has reported on sexual violence and the exploitation of Syrian refugee women in Lebanon. It noted that refugee women who were the heads of their households and without an adult male relative were particularly at risk and had little or no protection or access to justice.

UNHCR, the United Nations Population Fund (UNFPA) and Women’s Refugee Commission recently assessed protection risks for women and girls on their journey to Greece and onwards in Europe. They established that women and girls, especially those travelling alone, face particularly high risks of certain forms of violence, including sexual violence by smugglers, criminal groups and individuals in countries along the route. Concerns were expressed about the lack of awareness on the part of the authorities and humanitarian actors of the occurrence of sexual and gender-based violence affecting this group. This is also due to the lack of data on these crimes and the victims’ reluctance to speak out about their experiences. Cases of sexual violence committed by guards in refugee reception/transit centres have also been reported, including on European soil.

The detention of migrant women, including pregnant women, is also of serious concern. It is deplorable that the use of immigration detention in Europe has increased. Women are often held in detention together with men who are not members of their family. ‘Hotspots’ in Greece and Italy, envisaged initially as reception and registration centres for migrants, may in fact become detention centres with all the risks they carry for the female migrant population. The Strasbourg Court has found violations of the European Convention on Human Rights in several cases due to the substandard detention conditions in which migrant women, including pregnant women, were held.

There are increasing concerns about the lack of adequate reception conditions for refugees and migrants and its serious negative impact on refugee and migrant women’s physical safety, dignity and health. I was informed about this problem at the Centre for Temporary Accommodation of migrants in Melilla (Spain) which I visited in 2014. There are efforts in Germany to provide separate housing and sufficient medical care for vulnerable groups, such as pregnant women and traumatised women, but in practice, this is not always possible due to the large numbers of persons in need. It is of serious concern that these unsatisfactory reception conditions generate violence, including sexual violence, against migrant women. The situation is particularly difficult in the Greek islands where reports suggest that reception conditions often fail to meet minimum standards.

The number of refugee and migrant women living in appalling conditions in shanty towns or squats in Calais in France and its region has been rising since 2009. They now represent about 14% of the mobile population present in the region. Doctors and volunteers from Gynécologie Sans Frontières who carry out visits to these places have witnessed the hardship that refugee and migrant women endure there, lacking basic living conditions and access to adequate health care, including reproductive health care. Cases of sexual violence against women including rape, in some cases causing pregnancy, were noted. However, most of these crimes go unreported for different reasons, including the victim’s fear of reprisal. Médecins Sans Frontières has also reported inhuman living conditions for many pregnant migrant women in Greece.

Female refugee and migrants’ access to justice and asylum

One important aspect of the protection of the human rights of refugee and migrant women, notably women victims of violence, is ensuring that they have effective access to justice. It is also crucial to reach out to those victims in need who are not in a position to report the crimes. Refugee and migrant women in an irregular situation who are victims of violence or other abuse are in a particularly difficult situation as they may be reluctant to lodge a complaint. Particular attention should be paid to Roma migrant women and women with disabilities who may face additional barriers (including cultural ones) preventing them from reporting violence to the police and receiving adequate protection.

Asylum procedures need to be gender sensitive. This requires, inter alia, engaging more female interviewers and interpreters for asylum procedures. Useful practical guidance for national authorities and humanitarian workers in this field can be found in the UNHCR Handbook for the Protection of Women and Girls (2008) as well as in the IASC Gender Handbook.

The Parliamentary Assembly of the Council of Europe has recommended that member states take due account of gender-based violence and gender-related persecution in their asylum systems, beginning with the collection, analysis and publication of statistics and information on the issue.

In this context one should note that the Council of Europe Convention on preventing and combating violence against women and domestic violence (the Istanbul Convention) expressly provides for the protection of refugee women against violence. It requires that the parties to the Convention provide the legislative framework to recognise gender-based violence as a form of persecution in line with the UN Refugee Convention. Furthermore, states must develop gender-sensitive reception procedures and support services for asylum seekers. Also, the Convention provides that necessary legislative or other measures must ensure that migrant women victims of domestic violence whose residence status depends on that of the spouse or partner are granted an autonomous residence permit, irrespective of the duration of the marriage or the relationship, in the event of its dissolution.

What needs to be done?

In general, more humane migration policies should be prioritised by all states. European countries have to facilitate safe passage and access to asylum, improve reception conditions, foster effective integration into host societies and ensure a fairer distribution of asylum seekers.

In developing and implementing these policies, particular attention should be paid to the situation of women, girls and children, notably the victims of sexual and gender-based violence. UNHCR, UNFPA and the Women’s Refugee Commission have put forward a number of recommendations in this regard. They call for the establishment by states of a coordinated response system within and across borders that protects women and girls. States and EU agencies need to acknowledge the protection risks and put personnel and procedures in place specifically to prevent, identify, and respond to sexual and gender-based violence. In this regard, particular attention should be paid to female refugees and migrants’ reluctance to report violence or to access services. Reception centres and accommodation facilities need to be safe, accessible and responsive to women and girls. Last but not least, it is crucial to prioritise women, children and survivors’ of sexual and gender-based violence in family reunification procedures, as well as in relocation and resettlement schemes. Doing so would reduce incentives for these women and girls to move on by dangerous irregular means and reduce their exposure to sexual and gender-based violence.