Greece: progress in combating racism, but concerns remain about the impact of austerity 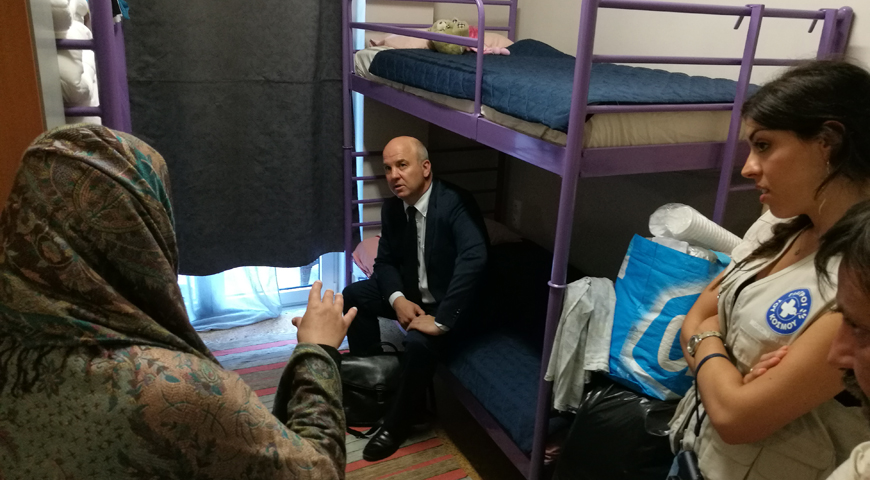 Shelter for destitute people, including refugees, run by the Doctors of the World in central Athens

“I welcome the government’s efforts to combat racism and homophobia in Greece. The 2014 anti-racism law has consolidated the legislative framework and provided useful tools to prosecutors and police officers. However, much more is needed in order to bring this law to life and to further enhance the efficiency and effectiveness of justice and law enforcement” said today Nils Muižnieks, the Council of Europe Commissioner for Human Rights, at the end of his five-day visit to Greece.

The Commissioner welcomed the prosecution of members, including MPs, of the neo-Nazi party “Golden Dawn” for being members of a criminal organisation but also for their hate speech. “Such action, as well as the government’s positive discourse towards migrants that I have noted, are very important as they send to society a clear signal of zero tolerance towards xenophobia and racism” added Commissioner Muižnieks. Looking forward to a more developed and dissuasive case-law in this field, the Commissioner encouraged the Greek authorities to provide systematic anti-discrimination training to law enforcement officers, prosecutors and judges and to collect and analyse hate crime data in a more comprehensive manner. “Greece can usefully draw upon Council of Europe’s relevant rich knowledge and expertise. The authorities should rapidly adopt comprehensive equal treatment legislation to further enhance their legislative arsenal in this area.”

The economic crisis and austerity measures have adversely impacted the population of Greece. Certain social groups are particularly vulnerable, especially persons with disabilities whose health care and standard of living have worsened. The Commissioner visited the Dafni psychiatric hospital and noted with serious concern the increasing demand in mental health care which is coupled by cuts in the staff and budget of the health care system, due to the on-going economic crisis and austerity. “This situation is very worrying as it entails risks of extensive use of medical restraints and sedatives, as well as of patients’ ill-treatment. It could also undo the effects of the reform of psychiatry initiated by the government and lead to re-institutionalisation of persons with intellectual and psycho-social disabilities. I am fully aware of the drastic economic constraints and limited margin of manoeuvre of the Greek authorities, however I urge them and their international lenders to spare health care, in particular psychiatry, from further budgetary cuts while negotiating and designing austerity measures” said the Commissioner.

Lastly, the Commissioner visited a shelter for destitute people, including refugees, run by the Doctors of the World in central Athens, and the refugee reception camp in Skaramangas currently hosting more than 3 000 persons. Whilst recognising and commending the enormous efforts made by Greece and the Greek people in the context of the current refugee crisis, the Commissioner noted the need to further improve the living conditions, including medical care, in refugee reception facilities and the processing of asylum claims.

“Preoccupation with the short-term imperatives, such as emergency reception and registration of asylum seekers, should not lead to ignoring the long-term, integration challenges posed by these arrivals in Greece, as in other European countries. As a de facto country of destination, Greece needs to design and implement an ambitious migrant integration policy starting with offering Greek language courses and inclusive education to all migrant children. In this context, effective protection from all forms of discrimination is vital, as well as the role played by national human rights structures, such as the Ombudsman and the National Human Rights Commission. It is also essential that other European countries live up to their responsibilities, fulfil their solidarity commitments towards Greece and facilitate refugee relocation and family reunification.”