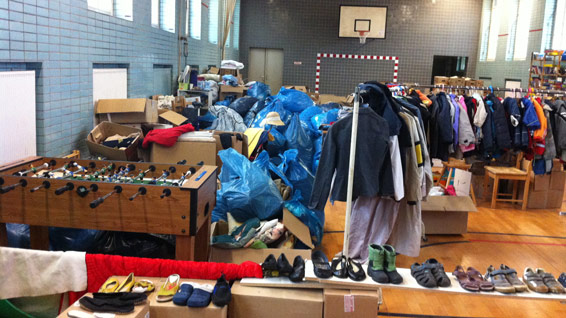 “Germany’s considerable efforts in helping asylum-seekers and refugees, in particular Syrians, is commendable and the support of the vast majority of the population is heartening. However, progress is needed to improve reception conditions, speed up fair asylum procedures and accelerate refugee integration” said today Nils Muižnieks, Council of Europe Commissioner for Human Rights, at the Bundespressekonferenz in Berlin while presenting his report on the visit to Germany carried out on 24 April and from 4 to 8 May 2015.

Recognising the challenges arising from the reception of an increasingly high number of asylum seekers, the Commissioner underlines the importance of always providing adequate reception conditions. To this end, he recommends the Federal authorities to adopt nationwide obligatory minimum standards for the operation of reception facilities and to increase their support to Länder and municipalities as regards the costs of reception. He also notes that further steps should be taken to improve asylum seekers’ access to health care. The Commissioner also urges the German authorities to ease the requirements for family reunification of refugees and other beneficiaries of international protection and foster their integration, in particular by strengthening language courses.

Welcoming the measures taken since 2013 to help Syrian refugees, the Commissioner recommends increasing the resettlement quota and aligning the status of resettled refugees to that of persons granted status through an asylum procedure in the country.

The Commissioner is very concerned by the rise of racism and intolerance in Germany and urges the German authorities to broaden their approach to combating racism, focusing not exclusively on the activities of extremist organised groups but also on racist acts committed by individuals not associated with these groups. “The NSU affair provides opportunities for progress to be made on this front. The amendments to the Criminal Code introducing racist motivation as an aggravating circumstance of ordinary offences are a good step in the right direction. Now it is necessary to provide formal guidance to the police and members of the judicial system on how to deal with racist offences and to better record and investigate hate crimes”.

The NSU affair also clearly indicates the need to look more deeply into how structural racism affects the conduct of law enforcement authorities towards minority groups. “I am concerned at reports of racially biased conduct, in particular racial profiling carried out by German law enforcement. Victims of discrimination by public authorities should be provided with effective legal protection. To effectively counter racism and discrimination it is also important to gather comprehensive data and disaggregate it by grounds such as ethnic origin.”

The Commissioner encourages the authorities to strengthen the existing legal framework on oversight of security and intelligence activities and to improve legal remedies against any abuse by these services. “The oversight currently operated by the Parliamentary Control Panel must be bolstered by considerably strengthening its support staff and technical expertise. Further resources should be allocated also to the G-10 Commission so that it has sufficient technical expertise to carry out its activities and capacity to effectively scrutinize intrusive data mining by the intelligence services. The authorities should also guarantee that all oversight bodies have access to all information, regardless of its level of classification.”

Lastly, the Commissioner commends Germany for having set up a number of national human rights institutions, such as the German Institute of Human Rights, the Federal Anti-Discrimination Agency, and the National Agency for the Prevention of Torture. At the same time, he calls on the German authorities to increase the powers and resources of such institutions in order to help them better serve the public good. He finally recommends establishing an independent police complaints mechanism able to deal effectively with complaints concerning all law enforcement officials.