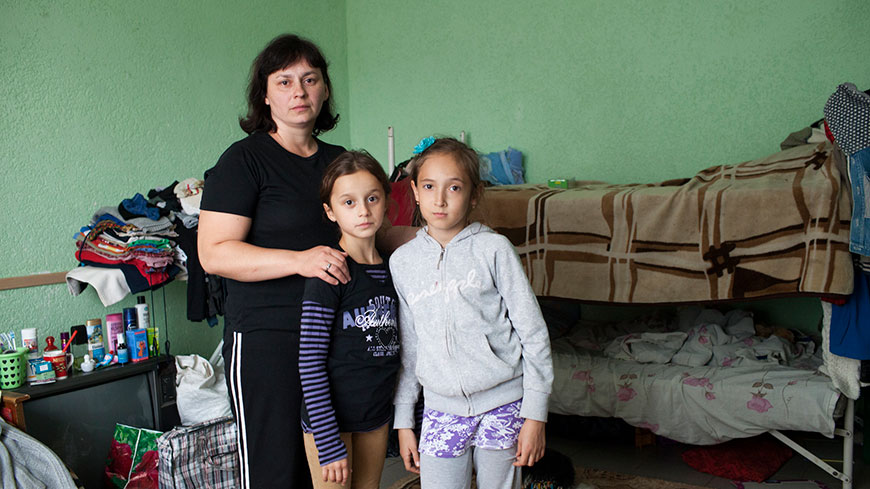 People are forced to leave their homes for different reasons, ranging from war and violence to natural disasters and climate change. However, this does not always entail the crossing of an internationally recognised border. Even if they do not leave their country, people who flee their homes are still very much in need of protection. This year marks the 20th anniversary of the United Nations Guiding Principles on Internal Displacement, a comprehensive set of international standards addressing the rights of internally displaced persons (IDPs). The anniversary should prompt states to give serious attention to their needs.

At the time of the launch of the UN Guiding Principles, the number of IDPs worldwide stood at 25 million; by the end of 2017, it had increased to about 40 million people[1]. While some progress has been achieved in recognising the magnitude of the issue and in developing appropriate solutions and response mechanisms, many internally displaced persons live in precarious conditions and are among the most vulnerable people, including in our own continent of Europe.

The population of IDPs worldwide is nearly double the population of refugees. However, the situation of IDPs has somewhat slipped off international agendas as attention was mainly focused on the situation of migrants, asylum-seekers and refugees who have left their countries. In order to address this, on 17 April 2018, a multi-stakeholder Plan of Action for Advancing Prevention, Protection and Solutions for Internally Displaced People was launched, following a collaborative process involving the UN Special Rapporteur on the Human Rights of IDPs, UNHCR, OCHA, governments and NGOs. The Plan focuses on the following four priority areas for the next three years: participation of IDPs; national laws and policies on internal displacement; data and analysis on internal displacement; and addressing protracted displacement and supporting durable solutions.

By the end of 2017, there were close to 4 million IDPs in Europe, mostly in Ukraine, Turkey, Azerbaijan, Cyprus, Serbia and Bosnia and Herzegovina. While the current patterns of internal displacement in Europe have mainly resulted from conflicts – some of which date back to the 1990s – and instability, some cases of displacement have emanated from the impact of natural disasters and climate change, for example in Italy following the earthquakes in 2016, and in Bosnia and Herzegovina due to floods in 2014. Many IDPs whose displacement has been protracted feel that they are spending their lives “in transit”. Often marginalised, with limited possibilities to enjoy their human rights in reality, and with no durable solutions in sight, it is scarcely surprising that their experience is one devoid of hope. Some of Europe’s IDPs have already remained in this situation for decades.

One of the key Guiding Principles is that displacement shall last no longer than required by the circumstances[2]. However, we have seen many situations where “the circumstances” – as in the case of unresolved conflicts or turmoil - turn out to be protracted. Historically, many governments in Europe have designed their policies addressing internal displacement on the assumption that the situation that led to the displacement would not last, and that the displaced persons would be able and willing to return to their places of origin rather soon. However, over time it became clear that the very nature of the conflicts or disasters at the origin of displacement also required the consideration of other durable solutions and options.

European governments can and should do much more to end the plight of IDPs. For one, they should put in place comprehensive strategies for preventing and addressing internal displacement in line with existing European and international standards. Council of Europe Committee of Ministers Recommendation Rec(2006)6 to member states on internally displaced persons specifies that “…[c]onditions for proper and sustainable integration of internally displaced persons following their displacement should be ensured”, and that national authorities bear the primary responsibility for providing protection and assistance to IDPs. The obligation of states to recognise and enforce the human rights of IDPs in accordance with the European Convention on Human Rights and other international treaties, while responding to their humanitarian and social needs, was also emphasised in a recent PACE Report on the humanitarian needs and rights of internally displaced persons in Europe.

The Framework on Durable Solutions for Internally Displaced Persons underscores that internally displaced people achieve a durable solution when they no longer have specific assistance and protection needs that are linked to their displacement, and can enjoy their human rights without discrimination on account of their displacement. A durable solution can be achieved – on the basis of an informed and voluntary decision by IDPs themselves - through their voluntary return and reintegration at places of origin, local integration (typically, in host communities), or settlement elsewhere in the country. These options are not mutually exclusive. Local integration or settlement in another part of the country should neither be regarded as a measure of last resort, nor perceived as negating the right of the individuals to return to their places of origin, once the requisite conditions are in place and make it possible for them to return.

The rights, needs and legitimate interests of IDPs should be at the centre of all IDP-related policies and decisions. This cannot be achieved without their meaningful participation and involvement in all decision-making processes which are relevant to their situation. As was highlighted by the UN Special Rapporteur on the Human Rights of internally displaced persons in her July 2017 report, a participation “revolution” is required to ensure that the right of internally displaced persons to participate in decisions affecting them is not only guaranteed in theory, but upheld in practice and given higher priority as part of national human rights and good governance obligations.

Implementation is key, both at national and local levels

Addressing the needs of IDPs requires a comprehensive approach. Strategies, laws and policies to support IDPs do exist in several member states of the Council of Europe. In Azerbaijan, where a policy to address internal displacement has been in place since 1993, the government introduced changes in early 2017 aimed at making the IDP assistance policy based on the actual needs of IDPs - rather than their status as IDPs - and moving from in-kind to cash-based assistance. In Georgia, the State Strategy for IDPs dates back to 2007, and legislation strengthening the protection of IDPs entered into force in 2014; currently, the government is looking into options allowing them to shift assistance from status-based to needs-based. In Serbia, where the unemployment rate among IDPs was twice as high as that of the local population, the National Strategy for Resolving the Issues of Refugees and Internally Displaced Persons for the period 2015–2020 was adopted to improve IDPs’ living conditions and social inclusion.

In Bosnia and Herzegovina and in Ukraine – the latter country having the most recent, large-scale internal displacement in Europe – strategies have been adopted to address displacement-related issues, but their implementation has been hampered by insufficient financial resources. Other common obstacles to effectively solving protracted displacement are inadequacies in terms of housing options, livelihood opportunities, as well as access to healthcare and quality education for IDP children. Around 15% of Europe’s protracted IDPs still live in makeshift shelters or informal settlements with little access to basic services[3].

Property disputes, which are common in post-conflict situations, make it more difficult for IDPs and returnees to pursue desirable options. As the European Court of Human Rights[4] has emphasised, national authorities are under obligation to put in place effective legal mechanisms to resolve property disputes. Moreover, it is key that judgments by that Court are properly executed at national level so that IDPs can be placed in a position where they can fully enjoy their rights.

National human rights institutions (NHRIs) play a fundamental role not only in the protection of the rights of internally displaced persons, but also in raising awareness about their situation. Recently, the European Network of National Human Rights Institutions (ENNHRI) issued a Statement on the Role of NHRIs to promote and protect the human rights of IDPs in (post) conflict situations, affirming the role of those bodies in advising governments, parliaments and other authorities on the rights of IDPs, as well as monitoring and reporting on their situation. Also, the importance of civil society representatives - who frequently find themselves in the forefront of providing assistance to those in need, including IDPs – cannot be overstated.

The plight of internally displaced people in Europe demands approaches that are more human rights-based. A human-rights based approach to addressing displacement is one that places the individual internally displaced person at the centre. That approach empowers IDPs to make free and informed decisions as to their preferred course of action, while also bearing in mind that those preferences may change over time. Moreover, instead of being driven by available options such as return, local integration and settlement elsewhere in the country, durable solutions to protracted displacement should be designed in such a way as to prioritise the enjoyment of the human rights of IDPs, including freedom to choose their residence, freedom of movement and non-discrimination. Securing a truly durable solution is often a long-term process, which involves gradually diminishing displacement-specific needs, and at the same time ensures that IDPs enjoy their rights without discrimination related to their displacement.

It is imperative that member states ensure full participation of IDPs in decision-making processes, and involve host communities to address broader concerns related to the inclusion policies. IDPs should be in a position to make a voluntary and informed choice as to which durable solutions they would like to pursue, and be able to participate in the planning and management of their preferred options. Special attention should be given to any particularly vulnerable individuals or groups, which may include older persons, those with disabilities, pregnant women, Roma, LGBTI and others. They, too, should be fully involved in the consultation processes and dedicated efforts should be undertaken to protect them from discrimination or stigmatisation of any kind. Poverty reduction programmes implemented by national, regional and local authorities should address aspects specific to internal displacement, and be well-coordinated and adequately resourced.

Effective participation also implies the right of the IDPs to vote and stand for elections, especially at the local level, as local authorities play a key role in promoting and sustaining their inclusion into the host communities. Governments should also make certain that internally displaced children have access to quality education through comprehensive, inclusive educational policies. Whenever relevant, the internally displaced persons should be included in transitional justice processes and related policy discussions. Ensuring justice for IDPs is an essential component of long-term peace and stability.

As Commissioner for Human Rights, I intend to devote close attention to addressing protracted displacement in Europe, both through my dialogue with authorities and in co-operation with national human rights structures and civil society.

[2] Principle 6(3) of the Guiding Principles on Internal Displacement