Creating trust through uncovering and recognising the truth: advancing recognition and remedy for antigypsyism 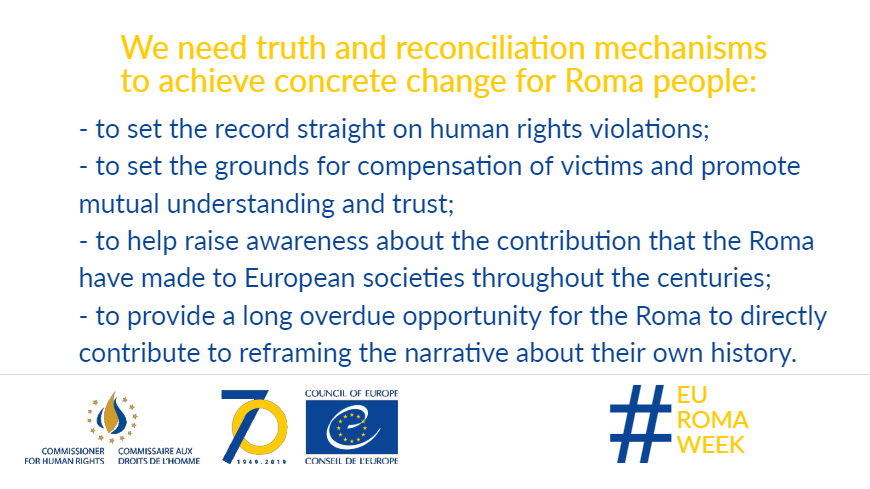 As I was preparing for this speech, I looked back at my first year as Council of Europe Commissioner for Human Rights to recall examples of work I have done to promote truth and reconciliation.

Two of my first public appearances last summer were in events which commemorated the Srebrenica genocide and the Roma Holocaust.

Afterwards, I continued engaging with national authorities and the media to counter the state of denial that still exists in many European countries when it comes to past human rights violations.

This is not only a professional duty. I come from a region of Europe where I witnessed the human cost that hatred and the absence of truth and reconciliation can cause.

This duty is particularly relevant today.

Ignorance, the denial of past atrocities and widespread anti-Gypsyism have not disappeared from our continent. Today, these phenomena are gaining ground, fueled by politicians who deny, trivialise or even justify human rights violations.

There is a continuity between past human rights violations and contemporary anti-Gypsyism. Practices such as chasing Roma out of their homes, segregating Roma children in schools or ethnic profiling by the police perpetuate past policies of stigmatising and excluding Roma from society.

We have to break this continuity. We have to take the measure of what happened and is still happening. We have to help the current and future generations to move past the walls of hate and ignorance and to build bridges of trust and peace.

Policies which foster equal access to education, employment or housing are of course necessary. But if we want to achieve meaningful change, we need to address some of the root causes of the problems. They have to do with deep prejudice, patronising approaches, and above all, a lack of consideration for the views of those concerned.

In other words, we must put the fight against anti-Gypsyism at the centre of our work.

Combating anti-Gypsyism requires acknowledging the past and providing justice to Roma victims of human rights violations and their descendants.

Truth and reconciliation commissions around the world have proved to be crucial elements in combating hatred and restoring trust and hope. They have contributed to uncovering human rights abuses, raising awareness and improving mutual understanding and trust among different parts of society. In some cases, survivors have found in them a measure of justice.

We need truth and reconciliation mechanisms in Europe too when it comes to Roma.

We need them to set the record straight on human rights violations against Roma, set the grounds for the compensation of victims and promote mutual understanding and trust.

We need them to raise awareness about the contribution that the Roma have made to European societies throughout the centuries.

We need them to provide a long-due opportunity for the Roma to directly contribute to reframing the narrative about their own history.

Some Council of Europe member states have provided encouraging examples in recent years. Sweden and Norway for instance established commissions to explore and expose past human rights violations against Roma in Sweden and Romanies and Taters in Norway. Switzerland established commissions to shed light on past human rights abuses, such as the forced separation of children from their families which affected many Yenish. They were accompanied by compensation funds and research programmes.

At European level, the Council of Europe has been doing good work on Roma history. The European Parliament adopted in 2017 an important resolution calling on the EU institutions and member states to set up truth and reconciliation commissions.

There is a clear European dimension to human rights problems affecting the Roma both in the past and nowadays.

We have seen – and continue to see – similar patterns of human rights violations affecting Roma in different countries at the same time. These include repeated forced housing evictions, ethnic profiling by the police, and the placement of Roma children on grounds of the socio-economic situation of their families.

Documenting and exposing such practices from a European perspective could help us better understand and fight against the mechanisms that lead to their repetition.

Therefore, European organisations should continue working in this field. They should continue raising awareness and pushing national authorities at the highest level to commit to such initiatives and engage constructively with Roma, NGOs and international organisations.

This work is needed more than ever.

But the search for truth should also lead to change. Truth is not enough if no concrete measures are taken to provide redress and improve the lives of the victims.

A case in point are the Roma who were resettled to a lead-contaminated camp in northern Kosovo[*] following the conflict at the end of the ‘90s.

In 2009, Thomas Hammarberg – who sits just there, and whom I salute for being such a passionate advocate for Roma rights – raised the alarm about the very poor and unhealthy conditions of those people. And the fact that many children were clearly under-developed because of exposure to contamination.

Seven years later, the UN Human Rights Advisory Panel found that many of those persons had suffered from a long list of human rights violations, including of their right to life.

Yet, none of the victims has received any compensation as of today. And the trust fund that has been set up for them is yet to receive contributions.

I will spare no efforts in reminding state authorities of how crucial it is that they fully support truth and reconciliation mechanisms and implement their recommendations seriously.

Only in this way can we achieve concrete results and change.

[*] All reference to Kosovo, whether to the territory, institutions or population, in this text shall be understood in full compliance with United Nations Security Council Resolution 1244 (1999) and without prejudice to the status of Kosovo.