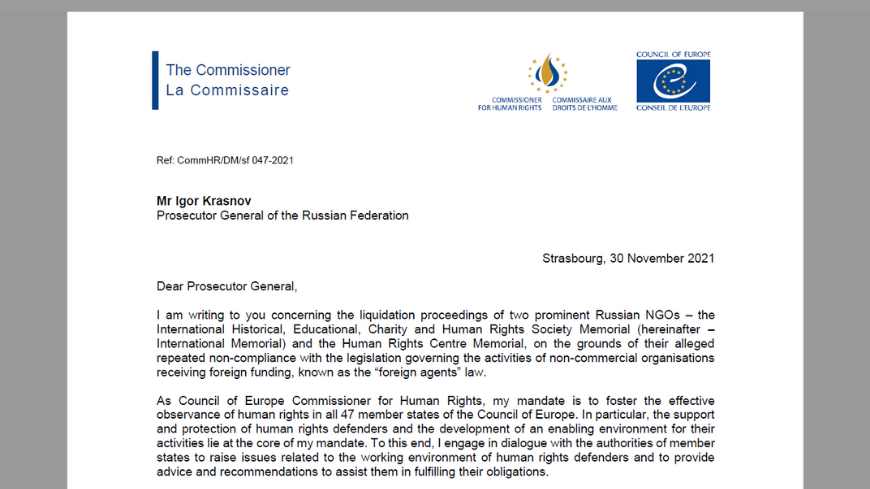 In a letter to the General Prosecutor of the Russian Federation published today, the Council of Europe Commissioner for Human Rights, Dunja Mijatović, expresses her concerns over the liquidation proceedings against two prominent Russian human rights groups - International Memorial and Human Rights Centre Memorial - based on the legislation governing the activities of non-commercial organisations receiving foreign funding, known as the “foreign agents” law. She urges the General Prosecutor to discontinue those proceedings and encourages him to take an active role in contributing to bringing the relevant legislation and related practice in line with European human rights standards.

The Commissioner points out that the law in question has been found to be at odds with the state’s duty to create a safe and enabling environment for civil society actors by various Council of Europe bodies as it largely interferes with the rights of freedom of association and expression and stigmatises and marginalises the persons concerned, with a significant chilling effect on the work of civil society organisations. In this context the liquidation proceedings are far from appearing as necessary and proportionate measures that could be justified under human rights standards.

The Commissioner also expresses dismay that the public scrutiny of domestic judicial decisions carried out by Human Rights Centre Memorial over the years is now seen as a justification of extremism and terrorist activities by the prosecuting authorities. More generally, she regrets that the Russian authorities continue to restrict the space for independent civil society activities and free speech through the use of criminal law provisions and procedures. Therefore, she stresses the urgent need for the Russian authorities to change their attitude towards independent civil society actors, including human rights defenders.