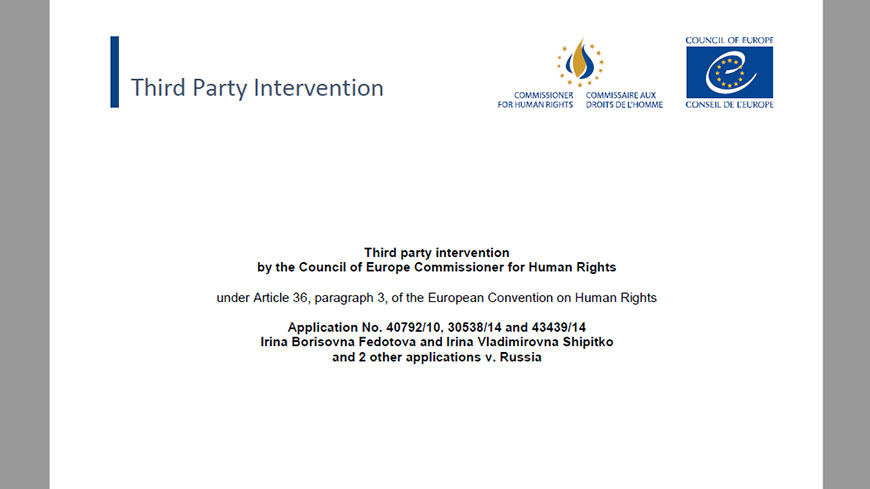 Today the Commissioner published her written observations to the European Court of Human Rights on the case of Irina Borisovna FEDOTOVA and Irina Vladimirovna SHIPITKO and 2 other applications v. Russia, which is pending before the Grand Chamber, concerning the absence of legal recognition of same sex relationships.

Commissioner Mijatović emphasises that stable same-sex couples, with or without children, are part of the rich diversity of families that make up our societies – regardless of whether a state recognises them or not. She stresses that in the absence of such recognition however, they are barred from fully enjoying their right to respect for private and family life guaranteed under the European Convention on Human Rights.

The Commissioner stresses that states should provide effective and non-discriminatory legal recognition to same-sex couples, in the form of same-sex civil marriage, civil unions or registered partnerships. Such legal recognition should be governed under a clear legal framework, be easily accessible, and clearly spell out the rights of those concerned in a comprehensive manner to cover the needs of a couple in all aspects of life.

She highlights the consolidation of a consensus in Europe in favour of providing legal recognition to same-sex couples and points out that the absence of consensus at the national level should not be considered as a valid argument to deny legal recognition to same-sex couples, especially when state policies are working against the respect, equality, and acceptance of LGBTI people.

Finally, the Commissioner underlines that the principle of equality before the law requires that legal recognition should be available to same-sex partners and that its absence constitutes discrimination on grounds of sexual orientation and perpetuates prejudices about same-sex relationships, while, conversely, access to such recognition has been shown to diminish intolerance against LGBTI people.