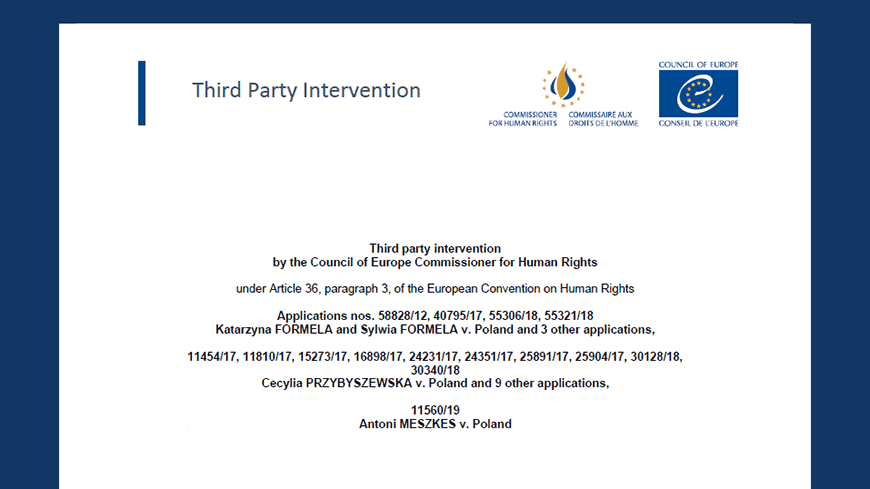 Today the Commissioner published her written observations to the European Court of Human Rights concerning the cases of Katarzyna Formela and Sylwia Formela v. Poland and 3 other applications, Cecylia Przybyszewska v. Poland and 9 other applications, and Antoni Meszkes v. Poland, all of which relate to the absence of a legal framework for the recognition of stable same-sex relationships.

Closely following the written observations submitted in the cases of Florin Buhuceanu and Victor Ciobotaru v. Romania and 12 other applications on 14 September 2020, Commissioner Mijatović emphasises that stable same-sex couples, with or without children, are part of the rich diversity of families that make up our societies – regardless of whether a state recognises them or not. She stresses that in the absence of such recognition, however, they are barred from fully enjoying their right to private and family life, as guaranteed under the European Convention on Human Rights (Article 8), and that this has a substantial impact on their daily lives.

The Commissioner stresses that, consistent with the Court’s case-law, states should afford same-sex couples effective and non-discriminatory legal recognition in the form of civil marriage, civil unions or registered partnerships. Such recognition must offer a clear and predictable framework and be comprehensive enough to cover the needs of a couple in a stable relationship in all aspects of life.

The Commissioner highlights the growing consensus in Europe on this issue, with 30 Council of Europe member states currently providing legal recognition for same-sex couples in one form or another. At the same time, she points out that the absence of consensus at national level cannot be considered a valid argument to deny legal recognition to same-sex couples. The Commissioner submits that it would be particularly unfortunate to lend credence to this argument where links can be detected between such lack of consensus and a policy of stigmatisation actively promoted by public authorities.