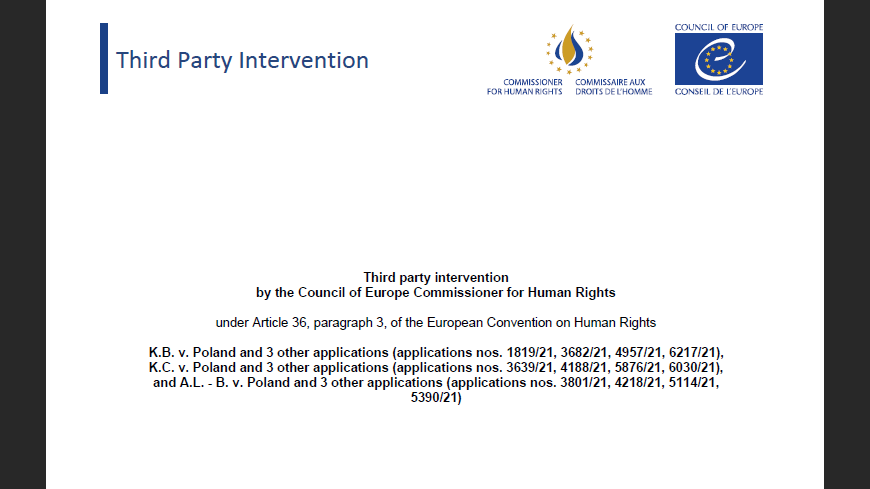 The Commissioner notes that the October 2020 ruling of Poland’s Constitutional Tribunal, which resulted in a near-total ban on abortions by removing one of the three exceptions for accessing abortion care, namely in case of foetal impairment, represents the latest step in an already overwhelmingly prohibitive legal and procedural framework governing access to safe and legal abortion care, with a harmful impact on women’s human rights in Poland. The ruling should also be seen against the background of the worsening situation with regard to women’s access to sexual and reproductive health and rights in the country. The Commissioner concludes that the ruling has created a situation removing Poland even further from its obligations under international human rights law, particularly those stemming from Articles 3 (prohibition of torture and inhuman or degrading treatment) and Article 8 (right to private and family life) of the European Convention on Human Rights and 8 of the European Convention on Human Rights. This situation, she underlines, also runs counter to the principle of non-retrogression under international human rights law.

The Commissioner recalls that ensuring women’s effective access to safe and legal abortion care is a critical component of states’ obligations to respect and guarantee women’s human rights, and in particular the freedom from torture and inhuman or degrading treatment under Article 3 and the right to private and family life under Article 8 of the European Convention on Human Rights. She stresses that making safe abortion care legal is not in itself sufficient to ensure compliance with human rights obligations and that states must also take concrete action to guarantee the quality of abortion care and ensure that it is available and accessible in practice.

The Commissioner notes that the worsening situation in Poland stands in stark contrast to legislation in the vast majority of Council of Europe member states that legalise access to abortion care. In this respect, the Commissioner highlights the firmly established European consensus in favour of access to safe and legal abortion and the general trend towards further removing remaining barriers in law and practice in this field.

She concludes that in order to ensure the effective protection of women’s human rights, Poland should urgently guarantee to all women and girls full and adequate access to safe and legal abortion care by bringing its law and practice into line with international human rights standards, including the Convention, and regional best practices.