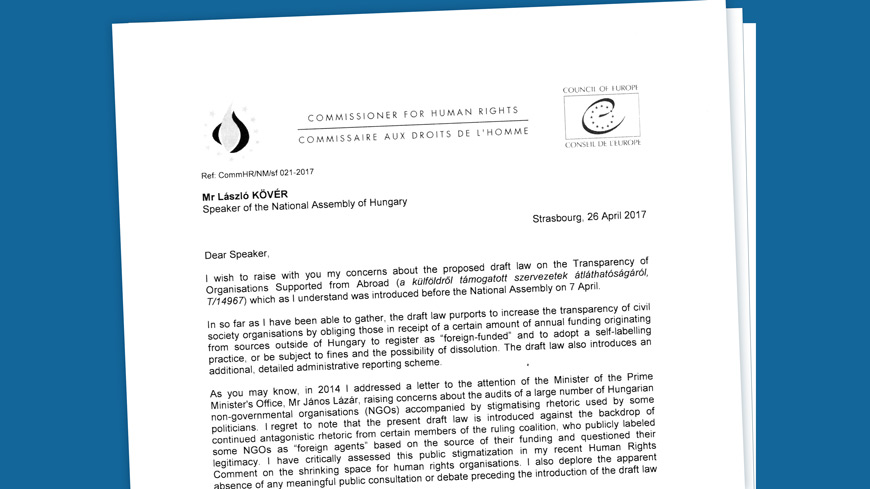 In a letter addressed to the Speaker of the National Assembly of Hungary, Mr László Kövér, published today, Commissioner Muižnieks urges the members of this Assembly to reject a proposed draft law on the Transparency of Organisations Supported from Abroad.

The Commissioner notes that the draft law carries a clear risk of stigmatising a large number of organisations pursuing lawful activities in the field of human rights, causing a chilling effect on their activities. It introduces far-reaching restrictions on freedom of association, which cannot be regarded as necessary in a democratic society and are therefore at variance with international human rights standards. The draft law introduces an additional administrative burden on NGOs falling within its scope without an apparent legitimate purpose. In addition, according to criteria which are not immediately clear, the draft law excludes from its scope other types of NGOs, such as those pursuing sports or religious activities.

The Commissioner calls on Hungary to respect international and European standards on freedom of association and to refrain from penalising, stigmatising or putting at any disadvantage whatsoever foreign-funded NGOs. “Of particular concern is the fact that non-compliance with the new requirements would lead to the imposition of fines and, ultimately, to the Prosecutor’s action for dissolution by a court through simplified proceedings. The sanction of dissolution and striking non-compliant organisations off the court register risks destroying the very essence of the right to association protected by Article 11 of the European Convention on Human Rights”.

The Commissioner further regrets the apparent absence of any meaningful public consultation or debate preceding the introduction of the draft law to the National Assembly on 7 April, against the backdrop of continued antagonistic rhetoric from certain members of the ruling coalition, who publicly labelled some NGOs as “foreign agents” based on their source of funding.