Challenges to human rights have intensified in Europe 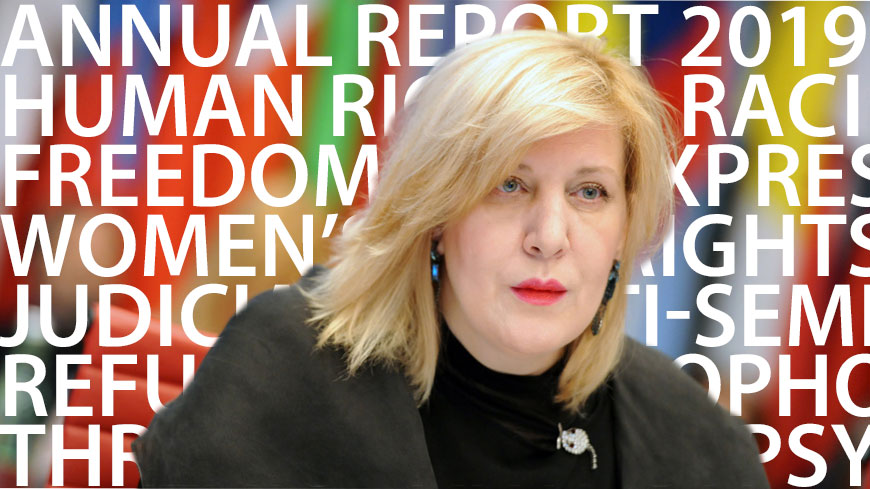 The Council of Europe Commissioner for Human Rights, Dunja Mijatović, published today her annual activity report covering 2019. The report provides an overall picture of the main problems, challenges and opportunities that European countries are facing in the field of human rights. “The image I get from my work is of a Europe circling a roundabout, uncertain about its direction and the human rights obligations which member states voluntarily agreed upon,” says the Commissioner, adding that the current COVID-19 pandemic is exacerbating long-standing problems and emphasising the weaknesses of Europe’s human rights protection system.

The Commissioner observes that in 2019 as in previous years, there have been growing challenges to human rights standards and principles all over the continent. In some cases, hostility to human rights as universal, indivisible and legally binding has increased, fuelling a corrosive narrative that endangers the principles and standards on which Europe has been built over the past seven decades.

Five of the topics covered in this report illustrate particularly well the ongoing backlash in Europe: the growing political and societal acceptance of racism; the disregard of the human rights of migrants and refugees; the threats to women’s rights; the repression of dissent; and the erosion of judicial independence.

The Commissioner also expresses concerns about European countries’ handling of migrants and asylum-seekers. “The increasing normalisation of illegal pushbacks, as well as acts aimed at dehumanising people attempting to cross borders, are particularly worrying. In some member states, severe humanitarian crises regarding reception conditions have been allowed to develop and worsen. The lives of thousands of migrants and asylum seekers have also been put at risk by the short-sighted decision to reduce state search and rescue operations in the Mediterranean".

Another widespread problem that the Commissioner underscores is gender inequality. “Progress is slow in bridging the gender pay gap, addressing discrimination at work and tackling women’s underrepresentation in political decision-making. Women are also still confronted with various obstacles preventing their full access to sexual and reproductive health and rights and an endless stream of sexist hate speech. What has already been achieved in terms of gender equality is threatened by discourse and initiatives from some ultra-conservative groups aimed at relegating women to traditional roles, in contradiction with human rights standards.”

Freedom to speak out and manifest dissent has also come under frequent attack. “Several peaceful demonstrators have been seriously injured through the disproportionate use of force by the police”, says Commissioner Mijatović. “Human rights defenders and journalists continued to work in hostile environments in a growing number of European countries. Legislation has been misused to detain and prosecute them, while public discourse by some political leaders has legitimised smear campaigns, threats and intimidation”.

The attempts by some national authorities to use their leverage to influence and instruct the judiciary, and to threaten judges for using their right to freedom of expression to state their opinion about an issue of public interest in the justice field are also among the Commissioner’s main concerns.

Lastly, the Commissioner warns against the risks that unregulated uses of digital technologies and artificial intelligence pose to human rights, in particular privacy, equality, and freedom of expression and assembly, stressing that much remains to be done in order to find the right balance between technological development and human rights protection.“

At the moment, states’ attention, resources and efforts are rightly devoted to heading off the COVID-19 pandemic and to protecting the health and lives of millions of people in Europe. Once the pandemic is under control, however, states will have to redouble their efforts to solve long-standing shortcomings in law, practice and discourse that are so damaging to human dignity and human rights”.