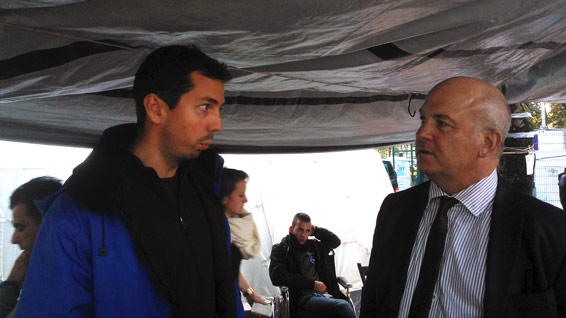 "The overwhelmingly positive response of Belgian society to the arrivals of refugees and the decision of the authorities to increase the quota of Syrian refugees they accept for resettlement are encouraging signs. They suggest that Belgium is ready to play its part to ensure that Europe meets the challenges arising from current refugee movements" said today Nils Muižnieks, Council of Europe Commissioner for Human Rights, at the end of a four-day visit to Belgium. "However, with the number of arrivals drastically increasing over the last few weeks, the authorities must speed up registration procedures and increase their reception capacity".

The Commissioner visited the Maximilien park in Brussels, where some 500 asylum-seekers waiting for an opportunity to register their claims were still camping in substandard conditions yesterday.

At the same time, the Commissioner underlined that is also important to address long-standing concerns in the field of asylum and migration, in particular the systematic detention of asylum-seekers at Belgium airports. "The Belgian authorities have already developed human rights-compliant alternatives to detention for families with children, who can be accommodated and live a normal life outside detention centres: these practices should be maintained and expanded to all families and other categories of asylum-seekers". Commissioner Muižnieks also indicated that more could be done in Belgium to identify and safeguard the best interests of children in all asylum and migration proceedings, as required by the UN Convention on the Rights of the Child.

The rights of persons with disabilities was another focus of the visit. The Commissioner acknowledged progress in this respect, such as the adoption in 2014 of a new law on legal capacity. He stressed that judges must now be provided with support to implement this law in line with the spirit of the UN Convention on the Rights of Persons with Disabilities (UNCRPD). However, more efforts are required regarding other areas of life of persons with disabilities, notably education. The Commissioner was informed about differences between the three communities: while the German-speaking community is in the process of dismantling its system of specialised education, Flanders has initiated with the “M” decree a shift towards more inclusive education; in the French community, pilot-projects are being carried out in several schools to promote integration of these children in mainstream schools. However, with the numbers of children with disabilities in separate special education still exceptionally high, "a nation-wide commitment to inclusive education is needed in Belgium" said the Commissioner. "Children with disabilities must be able to attend mainstream education on an equal footing with other pupils, as required by the UN CRPD”.

After a visit to the psychiatric ward of the Forest prison, the Commissioner also stressed the urgency of measures to prevent violations of the rights of detainees with psycho-social and intellectual disabilities, in line with the relevant judgments of the European Court of Human Rights against Belgium.

Commissioner Muižnieks also expressed concerns about serious problems of social exclusion of Roma migrants from other European countries. While praising existing good practices, such as the Roma stewards operating in some cities or the work of associations, he insisted on the need to expand and institutionalise social intervention so as to respond to the needs of the most vulnerable Roma families. Further attention must also be paid to the reported over-representation of Roma children originating from other EU member states in specialised education. Referring to the situation of Belgian Roma and Travellers who travel part of the year, the Commissioner stressed that “their way of life should be better respected, notably by increasing substantially the provision of halting sites throughout the country”. He regretted reports that Roma and Travellers were increasingly subjected to forced evictions, which heightens their vulnerability and exacerbates their social exclusion.

A report on the visit to Belgium is forthcoming.