Afrophobia: Europe should confront this legacy of colonialism and the slave trade 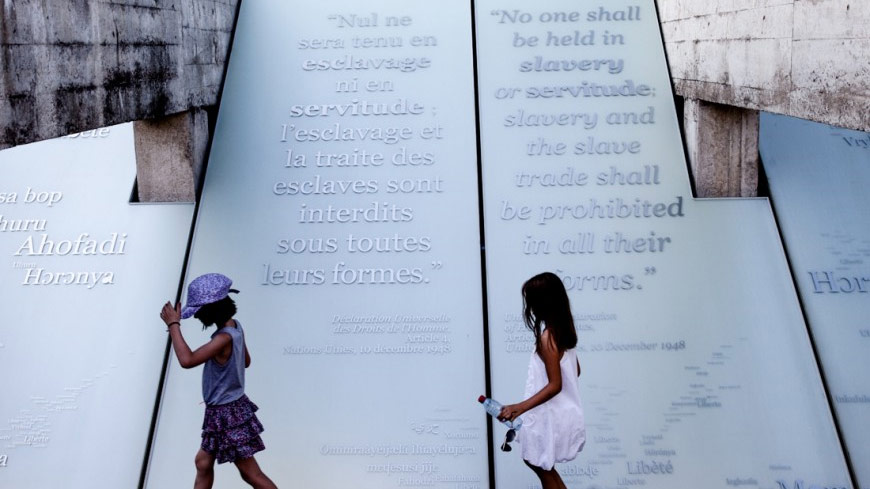 Memorial to the abolition of slavery - Nantes, France

Human enslavement and the slave trade were appalling tragedies in the history of humanity which still cast a shadow on Europe. Colonialism scarred the destiny of millions of men, women and children and left an indelible mark on our world. It shaped European societies for centuries and led to deeply rooted prejudices and inequalities. Its consequences are still largely ignored or denied today.

In a number of my country visits I have been worried by manifestations of both old and emerging forms of racism and discrimination against minorities. Black people are particularly exposed to racism and intolerance in many areas of their daily life.

It is disturbing to note that in several European countries, rhetoric used by certain parties and politicians may be qualified as hate speech. There are, sadly, a number of examples where politicians have targeted their Black colleagues with racist abuse. The 2013 cases of former ministers Ms Kyenge and Ms Taubira, in Italy and France respectively, were among the most shocking. Such instances of abuse affect not only  the politicians involved, but also have devastating effects on social cohesion more broadly. The rejection of diversity also has a potential deterrent effect on those who might engage in politics, thus perpetuating the underrepresentation of Black people in politics at national and European level.

Politicians, journalists and opinion-makers have a particularly important role to play by not allowing such intolerance and hate to proliferate. They should be encouraged to abstain from negative stereotyping and to promote rights-based values.

Sports play an important role in the development of positive values in our society and have a strong impact on young people. Earlier this year, I expressed my solidarity with the football player in Italy Sulley Muntari  who was a victim of racist insults from the supporters of the opposing team. Instead of being protected, he was sent off the pitch by the referee after reporting racist abuse. This example, far from being isolated, shows that regrettably racism still plagues sports, and football in particular.

Insults, slogans, symbols, gestures and chants of a racist nature have no place in and around stadiums. European countries must prevent and combat these phenomena, protect the victims and sanction the perpetrators. They should draw upon the useful guidance contained notably in the Council of Europe Committee of Ministers’ Recommendation on the prevention of racism, xenophobia and racial intolerance in sport (2001).

Widespread racism and discrimination in the context of migration

Migrants have often been portrayed by media and politicians as a menace to security in Europe and, in the long term, a direct threat to our cultures and societies. African migrants as a group have often been described as “economic migrants” to whom states should deny international protection. Fuelling public anxiety about migration combined with the absence of a serious debate on the causes of migratory flows from Africa, which is the home of some of the biggest humanitarian crises in the world, cannot but reinforce the negative stereotypes associated with Black minorities in Europe. The practice of the Spanish authorities of summarily returning Sub-Saharan Africans to Morocco from the Spanish cities of Ceuta and Melilla illustrates some of the dangers of this approach.

Many European politicians call for closing the migration route from Libya and the immediate return of asylum-seekers from sub-Saharan Africa in the mistaken belief that their claims are always manifestly unfounded. They are ignoring that migrant flows from sub-Saharan Africa are multi-faceted and include people who are in need of protection and should be granted refugee or subsidiary protection status when they arrive in Europe.

I am particularly concerned about the racial profiling of Black people and other visible ethnic minorities by law enforcement forces. Members of such minorities are subject to a disproportionately high number of identity checks. They are more often stopped, interrogated and searched by the police on the sole grounds of race or colour.

In the report on my 2014 visit to France, I condemned the fact that certain conduct by law enforcement agents seems to contribute to discrimination against minority groups. I very much regret to learn that little has changed. According to a survey carried out in 2016, the French Defender of Rights (ombudsman) found that identity checks affect mostly a limited minority group within the general population. Young men perceived as Black or Arab are twenty times more likely to be stopped by the police than the rest of the population. Police often do not explain the reasons for identity checks. Brutality, insults and lack of politness have on occasion accompanied such stops.

Despite underreporting and difficulties in some countries in collecting disaggregated data on race, descent or ethnic origin, similar experiences of discriminatory policing have been reported by the UN Working Group of Experts on People of African Descent in Italy, Germany, Sweden, the Netherlands and the United Kingdom. Counter-terrorism measures and the crackdown against irregular migrants over the last few years have accentuated these phenomena.

Differences in the treatment of Black people and other minorities in the law enforcement and criminal justice system are not only contrary to human rights standards, but are also ineffective and generate social tensions. When police engage in racial profiling, they decrease the likelihood that members of the target communities will cooperate with them in combatting crime and violent extremism. Anger and resentment towards the police due to abusive practices, combined with unemployment and poor housing, have also contributed to the regular eruption of riots in some European cities.

In order to counter arbitrariness and abuse, European states should be guided by European Commission against Racism and Intolerance (ECRI) General Policy Recommendation N° 11 on combating racism and racial discrimination on policing. In particular, they should clearly define and prohibit racial profiling by law, carry out research on racial profiling and monitor police activities, notably through the collection of statistics broken down by grounds such as ethnic origin, introduce a reasonable suspicion standard for police activities and train the police on the issue of racial profiling and on the use of the reasonable suspicion standard.

Given the difficulties complainants face in practice in proving that they were victims of racial profiling by the police, consideration should also be given to shifting the burden of proof when racial profiling is alleged; in this respect, reliable statistics are key in establishing the presumption of discrimination, upon which the burden of proof shifts on the law enforcement authorities to show that their control activities were carried out on non-discriminatory grounds.

Moreover, the existence of an independent and effective complaint mechanism against police officers for alleged discriminatory practices is essential for preventing ill-treatment and building confidence in law enforcement officers.

Social and economic inequalities suffered by Black people in Europe

It is obvious that ethnic origin is one of the main sources of discrimination. In its 2014 and 2015 annual reports, ECRI noted that discrimination testing has shown that Black people across Europe are often far less likely to obtain employment or housing rental contracts due to their skin colour.

National Human Rights Structures (NHRS) play a crucial role in protecting the human rights of vulnerable minority groups. Their expertise should be used by states to collect disaggregated data and translate it into baseline studies in order to establish a comprehensive picture of the situation of Black minorities. The collection of sensitive data should be voluntary and coupled with proper safeguards to preserve the right to respect for private life of individuals belonging to minority groups.

It is noteworthy that the European Court of Human Rights has consistently stressed the importance of statistics based on disaggregated data when it comes to demonstrating that visible minorities are disproportionately affected by discriminatory practices. Disaggregated data would facilitate the preparation of effective national action plans and strategies to address the specific challenge of Afrophobia in Europe. Research and data collection are also essential for strategic litigation before national and international courts.

At the same time, more inclusive education systems are key for tackling stereotypes and the perpetuation of discriminatory practices. Such systems would help eliminate school segregation that children still experience in several member states. They can also provide an effective tool to cater to the needs of schools in poor neighborhoods where socially disadvantaged students, including Black and other students, are likely to be the majority. By developing an inclusive education approach, the authorities would tackle the root causes that lead to low educational attainment and school segregation, thus upholding the right to quality education for everyone.

In parallel, national authorities must intensify their efforts to fight Afrophobia and the stereotypes which are associated with it by better including the teaching of the history of People of African Descent in the curricula with a focus on their important contribution to European societies.

The position of Black people in Europe needs to be strengthened, irrespective of whether it concerns recent migrants from Africa or already established Black communities.

European states must first come to terms with their own past. To this end, those that have not done so should publicly acknowledge that slavery, the slave trade and colonialism are among the major sources of current discrimination against Black people. This is a sine qua non for overcoming Afrophobia.

The current UN-initiated International Decade for People of African Descent is a timely opportunity for all countries to take proactive measures to promote equality and place stronger emphasis on combating Afrophobia in their national anti-discrimination policies.

Only a few states so far have envisaged to develop specific policies. It is high time to pay more attention to and invest more in advancing the social inclusion, equality and empowerment of Black people in Europe. In particular, European states should: