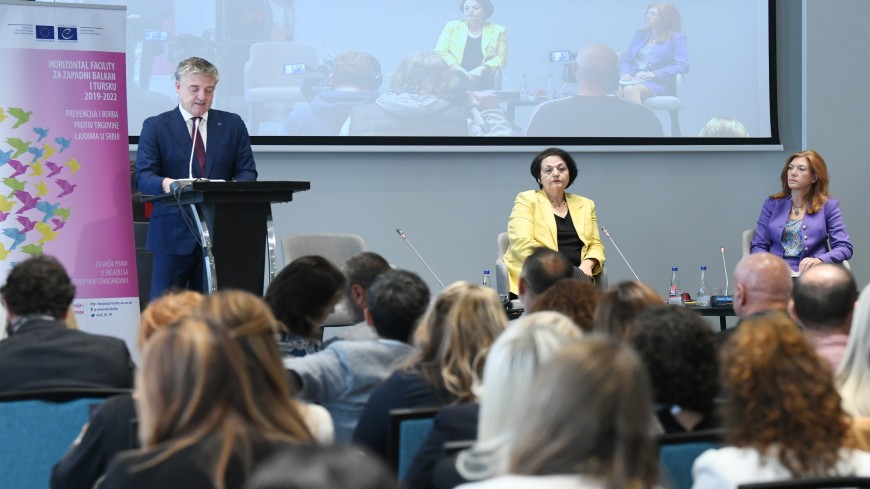 At the regional conference in Belgrade that started today, the European Union and the Council of Europe stressed the importance of recognising risk factors for trafficking for labour exploitation and developing consistent prevention strategies.

More than 100 participants from Bosnia and Herzegovina, North Macedonia, Serbia, other countries and international organisations, gathered at the two-day conference “Combating labour trafficking in Europe - standards, realities and new strategies for action” to discuss the strategies to combat the human trafficking for the purpose of exploitation, a crime which is affecting an increasing number of women, men and children, both transnationally and internally within the same country.

Petya Nestorova, Executive Secretary of the Council of Europe Convention on Action against Trafficking in Human Beings, highlighted: “Poverty, unemployment and a growing informal economy, together with demand for cheap labour and services, are factors that lead to labour trafficking. There is an increasing trend of recruiting victims via social media and the Internet. It is urgent to tackle the growing menace of labour trafficking, and the Council of Europe is currently preparing a new recommendation to its 46 member States which contains a comprehensive package of measures to prevent and combat labour trafficking. Amongst these measures is the extension of the scope of labour protection over all sectors of the economy, including the informal economy and undocumented workers. Businesses also have an important role to play by identifying and tackling the risks of human trafficking throughout their operations and supply chains.”

Diane Schmitt, European Union Anti-Trafficking Coordinator, underlined that labour exploitation has consistently been the second main form of exploitation in the European Union and that almost 30% of registered victims are trafficked for the purpose of labour exploitation. “At the EU level, we aim to tackle labour exploitation with a comprehensive approach, which ranges from prevention to investigation and prosecution of traffickers, while protecting victims at all stages”, said Schmitt. “Almost half of the victims in the European Union are from non-EU countries. We believe that this comprehensive approach can be effective and successful also beyond the European Union”, she explained. “Co-operation with our neighbours, such as Bosnia and Herzegovina, North Macedonia and Serbia and with international and regional organisations, such as the Council of Europe, is crucial to enhance our joint global endeavour”, concluded Schmitt.

“The Council of Europe consistently monitors and considers almost all societal processes from the perspective of respect for human rights, which Serbia is also committed to. Turning human beings into commodities, into objects, trading them as if slavery had never been abolished, puts before all of us the enormous task of helping these people and punishing those responsible for their misfortunes”, said Gordana Comic, Minister for Human and Minority Rights and Social Dialogue of the Republic of Serbia.

The conference took stock of trends and challenges in trafficking for labour exploitation and identified positive initiatives to strengthen prevention from a victim-centred perspective. The role of labour market actors and the private sector, as well as how to overcome challenges to victims’ access to justice and effective remedies, were amongst the topics discussed.

Although the numbers of identified cases in Bosnia and Herzegovina, North Macedonia and Serbia are small, in practice the scope of trafficking for labour exploitation is much wider with many cases remaining unreported. In Bosnia and Herzegovina, just eight potential victims were identified in the period 2017-2021. Only 3 victims were identified in North Macedonia between 2017 and 2020 and 39 more from Taiwan were detected in 2021. In the five-year period, the number of identified victims was the highest in Serbia, 41 in total, most of whom were Serbian, despite the increasing presence of migrant workers in the country.

New studies on labour trafficking in the three countries were presented at the conference. The studies examine the risk factors contributing to trafficking for labour exploitation, which include unemployment, ethnic discrimination, a significant informal economy, and mass arrival of migrants and refugees. The proposals for action contained in the studies should guide the national authorities in adopting new prevention strategies.

Former victims of trafficking for labour exploitation and applicants before the European Court of Human Rights, Seudin Zoletić and Marko Tamindžija from Bosnia and Herzegovina, shared traumatic experience they had in Azerbaijan and the steps they took to seek justice.

The conference was organised as part of co-operation actions on preventing and combating trafficking in human beings in Bosnia and Herzegovina, North Macedonia and Serbia, in the framework of the joint European Union/Council of Europe programme Horizontal Facility for the Western Balkans and Turkey 2019 - 2022.