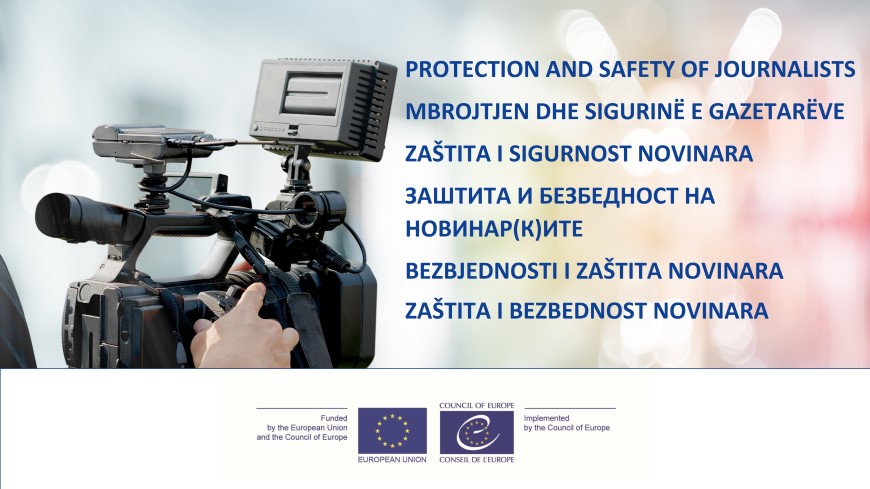 New online course on Protection and Safety of Journalists is now available in Albanian, Bosnian, Macedonian, Montenegrin and Serbian.

The course was developed by the Council of Europe Information Society Department, in cooperation with HELP Programme (Human Rights Education for Legal Professionals) within the framework of the action “Freedom of Expression and Freedom of the Media in South-East Europe (JUFREX 2)” implemented under the European Union and Council of Europe Joint Programme “Horizontal Facility for the Western Balkans and Turkey II (2019-2022)”.

This free HELP online course aims at assisting legal professionals, but also journalists and law-enforcement officials, in identifying and tackling the threats towards journalists and other media actors. Please read the course brief here.

The overall length of the course is approximately 10 hours and is composed of five substantive modules.

At the end of each module there is a quiz and a summary of the module. Upon finalisation, provided the user has successfully passed the course an electronic statement of accomplishment is provided.

JUFREX-2 project partners will be able to implement tutored courses on Protection and Safety of Journalists containing information on international standards but also on the Western Balkans region’s domestic legislative and institutional frameworks and practices (Albania, Bosnia and Herzegovina, Kosovo*, Montenegro, North Macedonia and Serbia). These courses will be provided/offered by national training institutions for legal professionals (Judicial Academies, Bar Associations) and Universities in 2021/2022 and used as a tool to supplement traditional educational materials used in legal education, also beyond the project’s life time.

Aside from the tutored courses, the self-learning courses are now available at the HELP platform and in the following languages:

We invite you to check our course on Protection and Safety of Journalists.
Enjoy learning!