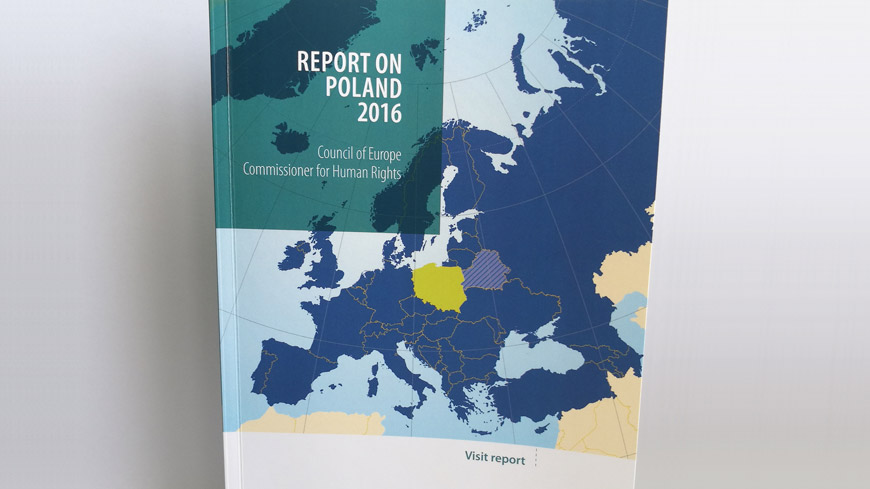 “Recent far-reaching changes to Poland’s legal and institutional framework threaten human rights and undermine the rule of law, on which the protection of human rights ultimately depends. Lawmakers and the Government should urgently change course”, said today Nils Muižnieks, the Council of Europe Commissioner for Human Rights, during a press conference in Warsaw in which he presented a report based on his visit to the country carried out last February.

The Commissioner is particularly concerned by the prolonged paralysis of the Constitutional Tribunal which “bears heavy consequences for the human rights protection of all Polish citizens and prevents human rights proofing of legislation”. He called on the Polish authorities to urgently find a way out of the current deadlock, stressing that “the rule of law requires that any solution be based on respect for and full implementation of the judgments of the Tribunal”.

The new law on surveillance activities also raises serious concerns of incompatibility with international human rights law because it expands the powers of law enforcement agencies, police forces and security services without establishing the necessary safeguards to avoid abuse. “The Polish authorities should increase the protection of privacy and personal data and make the law clearer as to the offences, activities and people subjected to surveillance. They should also remedy the lack of a democratic, independent and efficient system of control of surveillance activities”.

The Commissioner welcomes the efforts underway in Poland to reduce the length of judicial proceedings and the decrease in the use and length of pre-trial detention. However, he remains concerned about recent amendments to the Code of Criminal Procedure and to the Law on Prosecution which may jeopardise the protection of the right to a fair trial in criminal proceedings, the presumption of innocence and the right to defence. Referring in particular to the recent merger of the positions of Minister of Justice and Prosecutor General accompanied by the attribution of new powers, the Commissioner noted that “a few countries in Europe do have a prosecutor’s office forming part of the executive authority and subordinate to the Ministry of Justice. However the attribution of such extensive powers to a politically appointed figure without the establishment of corresponding safeguards to avoid abuse of powers poses a considerable threat to human rights”. The Polish authorities should review the new legislation on prosecution services in light of European standards and best practice to secure the autonomy and independence of the prosecution services from political and other interference.

While political influence on public service media pre-dates current reforms, a number of recent developments have worsened the problem. “Putting public television and radio under the direct control of the government runs contrary to Council of Europe standards on media freedom” said the Commissioner referring in particular to changes introduced in December 2015 through the so-called “Small Media Law”. Addressing a broader reform of public service media which is currently underway, the Commissioner urged the Polish authorities to introduce safeguards to guarantee the independence of public service media from political influence. The new arrangements should also fully preserve the role the Constitution gives to the National Broadcasting Council to safeguard freedom of expression, the right to information and the public interest in radio broadcasting and television. The Commissioner is pleased to note that the Polish authorities have since entered into a dialogue with the Council of Europe on this legislation. He also encourages the Polish authorities to consider repealing all criminal provisions against defamation and to deal with it through strictly proportionate civil sanctions only.

The Commissioner calls for more efforts in advancing gender equality, including adequate financial and human resources to institutions dealing with discrimination on the grounds of sex and long-term measures to fight against gender-based stereotypes, particularly in education, employment and the media.

Commissioner Muižnieks further urges the Polish authorities to ensure that mandatory, comprehensive sexuality education that is age-appropriate, evidence-based, and non-judgmental be taught in all schools in Poland. He also recommends that the Polish authorities remove the persistent barriers in access to contraception for all women throughout the country.

Lastly, he calls upon the Polish authorities to remove all the barriers which still hamper women’s access to safe and legal abortion as provided by Polish legislation. “A first step is to fully implement the judgments of the European Court of Human Rights which condemned Poland three times over the last nine years for hindering access to abortion and, in two of these cases, also for failing to treat humanely the women concerned”. The Polish authorities are also encouraged to further decriminalise abortion within reasonable gestational limits so as to avoid the chilling effect on doctors willing to perform this medical procedure.