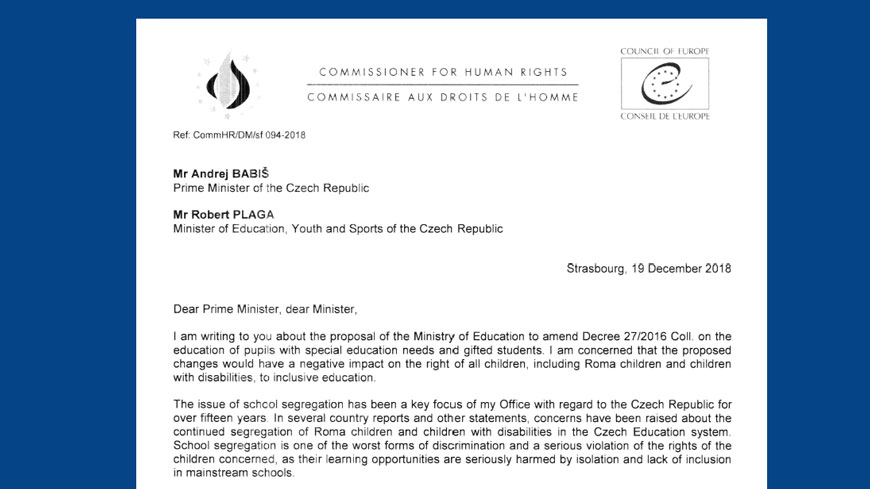 In a letter to the Czech Republic’s Prime Minister, Andrej Babiš, and Minister of Education, Youth and Sports, Robert Plaga, published today, the Commissioner addresses proposed changes to Decree 27/2016 Coll. on the education of pupils with special education needs. The Commissioner expresses her concern that these changes could have a negative impact on the right of all children, including Roma children and children with disabilities, to inclusive education.

The Commissioner notes that the issue of segregation in education is a long-standing concern in the Czech Republic, saying that “school segregation is one of the worst forms of discrimination and a serious violation of the rights of the children concerned, as their learning opportunities are seriously harmed by isolation and lack of inclusion in mainstream schools.” The Commissioner calls on the Government to ensure changes made to the Decree would not jeopardise the right to inclusive education. She notes the importance of ensuring schools are left in no doubt that inclusion into mainstream education should be prioritised, refraining from steps that would divert more children to special education, and ensuring sufficient support for children with special education needs.

The Commissioner acknowledges that states transitioning to inclusive education faced challenges, including social resistance, but underscored that “it is the responsibility of governments to engage the public in dialogue to address apprehensions, to tackle any underlying prejudices, and to stand firm in promoting the value of inclusive education for children and society alike.” She therefore called on the Government to continue to implement its reforms that would lead to an inclusive education system resolutely.