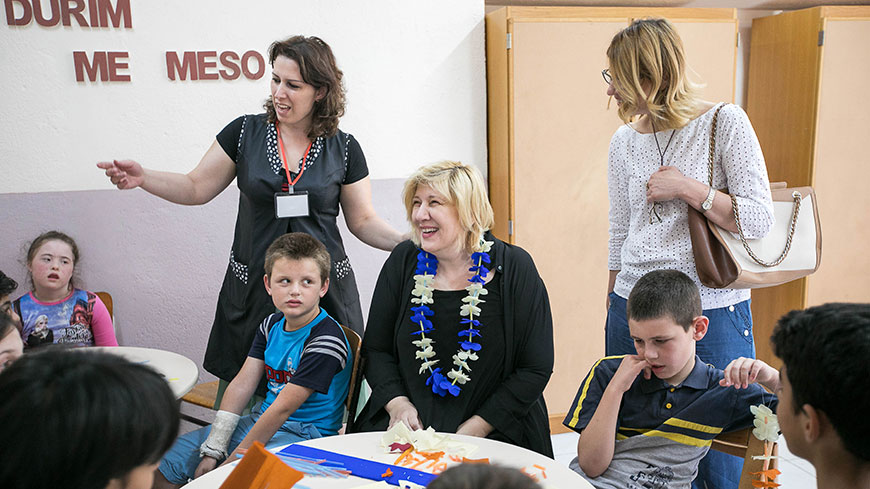 Today the Council of Europe Commissioner for Human Rights, Dunja Mijatović, concluded her five-day visit to Albania which focused on children’s rights, the rights of persons with disabilities, and access to free legal aid.

Concerning children’s rights, the Commissioner welcomes the authorities’ commitment to ensuring better protection of children through legislation which contains the necessary human rights and anti-discrimination safeguards, including the 2017 law on the protection of children’s rights. She stresses the need for more effective implementation of the existing legislation and better co-operation between different levels of responsible authorities.

As regards violence against children, in particular violence in schools, a number of measures have been or are being planned by the authorities to address this issue. “I am pleased that there is a large consensus of all stakeholders that violence against children is unacceptable. However, continuous awareness raising is needed to change societal attitudes that violence against children as a way of disciplining them is acceptable.” The Commissioner also encourages the authorities to continue addressing bullying and violence among peers, which appear to be widespread in schools. Moreover, raising the capacity and training of education professionals in preventing cases of violence, including sexual violence and children witnessing domestic violence has been emphasised by the Commissioner.

Noting that Albanian legislation provides for inclusion of all children in mainstream education without discrimination on any ground, the Commissioner calls on the authorities to sustain their efforts in implementing the relevant legislation with the aim of ensuring that all children, in particular Roma and Egyptian children and children with disabilities, are included in mainstream schools. The Commissioner emphasises the important role of assistant teachers in this regard, and welcomes the authorities’ commitment to increasing the number of such teachers, which currently stands at 620, so that all children with disabilities have adequate support for inclusion. During her visit to the special school for children with disabilities “3 qershori”, the Commissioner was informed that four children from that school have been successfully included in mainstream education during this school year. This shows that inclusion can work in practice when there is willingness, professional commitment and adequate support. In the kindergarten “Guerrille” in Shkodra, which the Commissioner also visited, she saw how the joint work of parents from the Roma and wider communities, as well as the commitment of education professionals, bolstered by support from the local community, resulted in the successful integration of Roma children in education.

Following her visit to the state institution for social care “Shtëpia e Fëmijës”, in Shkodra, where children have been placed mainly due to their parents’ poverty, the Commissioner encourages the authorities to move towards full deinstitutionalisation of children from state care, while ensuring that no child is left without protection and adequate care, and that the best interest of the child is always adequately taken into account. The Commissioner also recalls that children cannot be removed from their parents’ custody solely on grounds of the family’s socio-economic condition. The authorities should instead provide adequate support to families.

The Commissioner observed that deinstitutionalisation of persons with disabilities has not been progressing. “Persons with disabilities need to fully enjoy their rights to live independently and be included in the community. The authorities should develop and implement a deinstitutionalisation road map and provide community-based services, rather than continuing to resort to the use of residential institutions. However, this process needs to be carefully planned, in order to avoid that any person with disabilities is left without the necessary supports for independent living upon their departure from an institution. The authorities should also amend legislation in order to stop depriving persons with disabilities of their legal capacity, starting with the immediate abolition of plenary guardianship so as to ensure that they enjoy legal capacity on an equal basis with others in all aspects of life.”

Last but not least, emphasising the importance of access to free legal aid for children and persons with disabilities, the Commissioner welcomes the adoption in 2017 of the new Law on Free Legal Aid which broadens the scope of beneficiaries of legal aid and calls for its effective and prompt implementation.