Kosovo*: address shortcomings in the field of transitional justice and social cohesion, freedom of the media, and women’s rights and gender equality 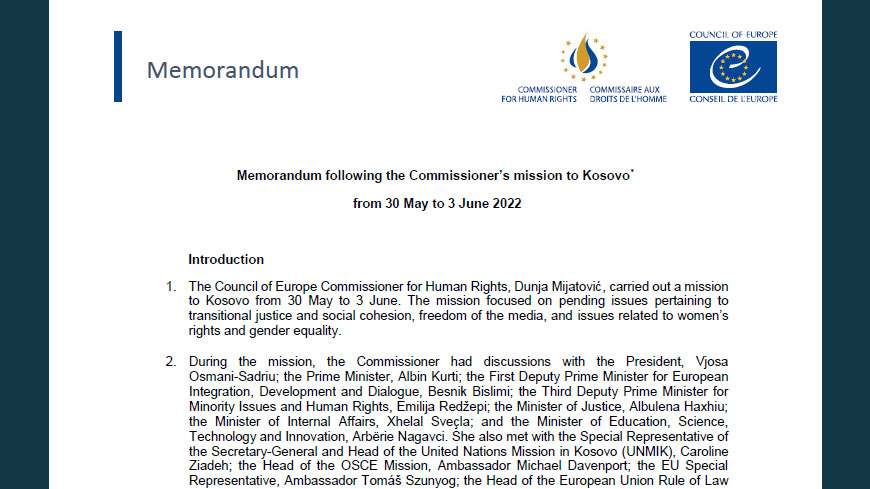 “More than two decades after the armed conflict in Kosovo, social cohesion is still hampered by impunity for war-related crimes, unresolved cases of missing persons, lack of access to reparations for all war victims, obstacles to sustainable returns of displaced persons and ethnic divisions”, said today the Council of Europe Commissioner for Human Rights, Dunja Mijatović, while releasing a Memorandum following her mission to Kosovo from 30 May to 3 June.

The Commissioner underscores that the present shortcomings in the investigation, prosecution and trying of war-related crimes now under the responsibility of Kosovo’s justice system need to be effectively addressed. She also underlines the need to enhance cooperation with the Kosovo Specialist Chambers and Specialist Prosecutor’s Office. “All civilian war victims, without exception, should have access to reparations, and safe conditions should be in place for victims of war-related crimes of sexual violence to come forward”, she said.

Regarding the fate of missing persons, the Commissioner encourages Belgrade and Pristina to resolve their disputes and cooperate on the resolution of the remaining cases, putting the families of the missing persons at the centre of all their considerations.

Many obstacles to sustainable returns remain in place and need to be addressed, especially with regard to addressing crimes that undermine potential returnees' sense of safety and obstacles to the enjoyment of property rights, in spite of improvements to the legal framework. “The continuing lack of implementation of the judgment of the Constitutional Court of Kosovo concerning the Visoki Dečani Monastery poses important questions regarding respect for the rule of law. It needs to be promptly implemented”, she said.

Regretting the persistence of divisions along ethnic lines, the Commissioner stresses the importance of developing a single education system, respectful of all communities’ cultural and linguistic differences. She underscores the need to address shortcomings in the implementation of the 2006 Law on the Use of Languages and to take decisive, short-term action to ensure the protection and promotion of language rights of non-majority communities.

Regarding media freedom, the Commissioner calls for the full implementation of the existing legislation, in particular with regard to access to information. “Journalists should be able to conduct their vital work free from strategic lawsuits against public participation (SLAPPs) and from violence. Harassment and impunity for crimes against journalists must end, including for the 13 cases of murders and disappearances of Kosovo Albanian and Serb journalists, which occurred between 1998 and 2005,” she said. She also stressed the importance of providing sustainable funding to the Press Council and to the public service media to shield them from undue interference. At the same time, she called on journalists to adhere to ethical codes of conduct.

On issues related to women’s rights and gender equality, the Commissioner noted a significant gap between domestic legislation and the situation on the ground, due in particular to the persistence of deeply rooted patriarchal norms in society. She is concerned at the low participation of women in the labour market, political life and decision-making and their position with respect to education, health and the division of responsibilities, which have worsened due to the COVID-19 pandemic. The Commissioner noted with interest steps taken in the field of women’s access to property rights and inheritance and the announced amendments to the Civil Code to address remaining shortcomings. Finally, the Commissioner stresses the need for harmonisation of domestic law with the Istanbul Convention and its effective implementation, as well as for continuous training of members of the judiciary and law enforcement officers in this field.

* All reference to Kosovo, whether to the territory, institutions, or population, in this text, shall be understood in full compliance with United Nations Security Council Resolution 1244 (1999) and without prejudice to the status of Kosovo.