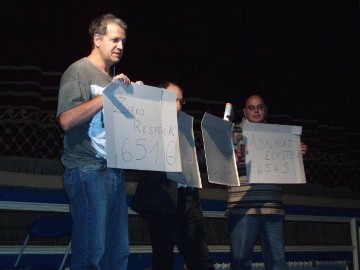 The aim of the “Fortnight” was twofold: firstly, to make Roma culture and Roma history more visible and more accessible to the target group, namely upper secondary school pupils, students, teachers, Roma and non-Roma educational and cultural associations, and, of course, the general public. Secondly, the aim was to promote the diffusion of information about the Council of Europe’s projects concerning the Roma.

On this basis, seven films on Roma people, whether shot by Roma directors or not, were chosen for the matinée and evening shows, including “Swing” and “Latcho Drom” by Tony Gatlif, the guest of honour, Emir Kusturica’s “Time of the Gypsies” and Dorota Kędzierzawska’s “Devils, Devils”. As a matter of fact, all of these feature films depicted a wide array of outlooks on Roma in space and in time. The topics chosen for the debates were discrimination, racism and minorities in Europe, which some specialists - including Tony Gatlif, Dorota Kędzierzawska, Dominique Chansel and Georges Federmann - discussed after the shows. 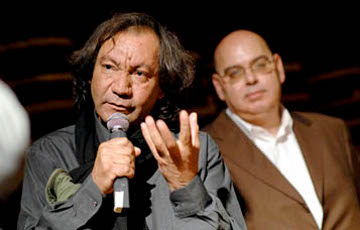 Furthermore, some activities were organised at the same time, for instance the concert of the “Di Mauro Swing” band and the picture exhibition of the Council of Europe, in the context of the “Dosta! Enough!” campaign, by Sandro Weltin, as well as two prize-giving ceremonies. The first one concerned the best script contest “A look at the Roma”, in the framework of the project “Education of Roma Children” (Directorate of Education). The winners were secondary school pupils: A. Basak and L. Herrman, E. Riedinger and C. Wefelscheid. The second award was for the short video contest in the context of the “Dosta!” campaign run by the Roma and Travellers Division of the Council of Europe.

The success of the first “Fortnight” led the hosts to organise the “2nd edition of the Fortnight of Roma Cinema” from 11th June to 1st July 2008. On this occasion there were nine films - such as Toni Gatlif’s “Transylvania” and “Vengo”, “When the Road Bends: Tales of a Gypsy Caravan” by Jasmine Dellal, “At Great Cost (The Horse That Cried)” by Mark Donskoi and “Life is a Miracle” by Emir Kusturica. This was followed by debates on issues like identity, diversity and discrimination against Roma,. Once again the cinema offered an ideal platform for the cultural promotion and production of educational materials.

The event, organised by the Directorate of Education, Division for the European Dimension of Education, and the Cinema Odyssée, and with the financial aid of the Council of Europe Permanent Representation of Finland, had the honour of welcoming Tony Gatlif as a guest. In this case the dates of the projections were chosen in order to coincide with the inaugural meeting of the “Route of the Roma Culture and Heritage”, programme of the Directorate for Education project “Education of Roma Children” and also the Directorate of Culture - Programme of the Cultural Routes of the Council of Europe.

As a result, the Council of Europe has published the pedagogical work “Roma On The Screen”. In this sense, the choice of the films - often portraying stereotypes - were taken not only to stimulate the debates but also to help create a critical vision concerning the image of Roma people, sometimes far away from the one in reality.

In general, both festivals achieved all of their original aims. In fact, the two “Fortnights” attracted the attention of many Roma and non Roma people, as the full auditoriums proved, and provoked increasing interest from pupils, students and teachers towards Roma culture and history.

However, Roma related cultural activities did not stop at this point. The Roma and Travellers Team at the Council of Europe has kept promoting and supporting film festivals internationally through its “Dosta! Enough!” campaign, as well as support from the Council of Europe itself. Specifically, starting in the year 2009, the “Rolling Film Festival” has been its most acknowledged event bringing forward Roma communities to other communities throughout Kosovo*, supporting Romani artistic expression, and doing so through a festive and educational means, combatting stereotypes and promoting positive inter-ethnic relations. Including culture as part of the Kosovo Roma integration Action Plan is fundamental in recognizing education, culture, and non-discrimination as crucial measures in order to break the cycle of poverty and including marginalized minorities in national life. Every year the festival was organized, the films selected represented the diversity, richness, and common humanity of Roma stories in a five-day festival in Pristina.

Its latest and 4th edition took place in 2014 from the 19th until the 23rd of October, featuring artists such as Sami Mustafa, an artistic director that explored the Roma roots of one of cinema’s greatest icons, Charlie Chaplin. It also featured a variety of discussion rooms and musical acts such as “Gypsy Groove”, along with the vast amount of films, documentaries, and short films that it had. The festival also held three different awards for:

Overall, every year the festival has been held can be considered a success, introducing the lives of Roma around the world, creating a platform to showcase real life stories of Roma in Kosovo through locally produced films, and standing as an event that is referenced internationally in regards to presenting culture related to Roma. Below are the links to the different editions that have been held: