français
The President of the CPT, Alan Mitchell, met with Deputy Prime Minister and Minister of the Interior, Davor Božinović, in Zagreb on Monday, 18 October 2021, to discuss the treatment of migrants deprived of their liberty.
19/10/2021 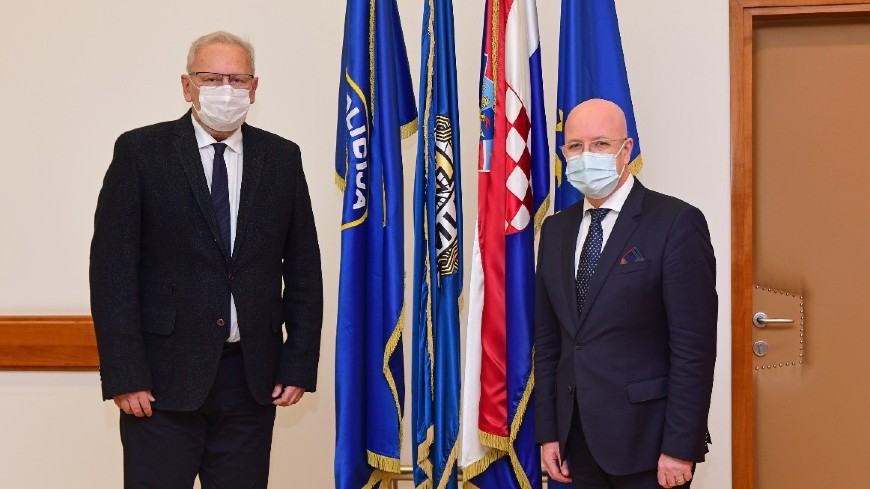 The talks were held in an open and constructive atmosphere, focusing on the challenges facing Croatia to manage its extensive land borders and the migration flows into the country. There was mutual recognition that there has to be a coordinated European approach to managing the entry of large numbers of migrants into Europe. At the same time, the CPT’s President reiterated the necessity for the Croatian authorities to take concerted action to ensure that migrants intercepted by police units in the country are not subjected to treatment contrary to Article 3 of the European Convention on Human Rights. The Deputy Prime Minister recalled his Ministry’s position that every clear allegation of ill-treatment or excessive use of force by police officers would be investigated, and he referred to the rapid steps taken following the recent publication of video footage of migrants being beaten by members of the intervention police. He also referred to the multiple measures taken by his Ministry to promote professionalism among police officers and to bolster internal and external oversight of police actions. Further, the discussions touched on the CPT’s announced periodic visit to Croatia in 2022 and the Croatian Government’s continued commitment to work with the Committee to strengthen the protection of persons deprived of their liberty from any form of ill-treatment.

The talks were also attended by the Secretary of State of the Ministry of the Interior, Terezija Gras, the Head of the Border Police, Zoran Ničeno, and the Head of Sector for European and International Affairs, Svjetlana Harambašić, as well as by the Executive Secretary of the CPT, Régis Brillat, and CPT Secretariat members, Hugh Chetwynd and Christian Loda.