Applications in the field of neurotechnology raise issues of privacy, personhood, and discrimination. It therefore needs to be assessed whether these issues can be sufficiently addressed by the existing human rights framework or whether new human rights pertaining to cognitive liberty, mental privacy, and mental integrity and psychological continuity, need to be entertained in order to govern neurotechnologies. Alternatively, other flexible forms of good governance may be better suited for regulating neurotechnologies.

Technological innovation often creates its own dynamic. Major technological breakthroughs in fields such as artificial intelligence, genome editing, and neurotechnology have the potential to advance biomedicine and healthcare. However, uncertainty exists about the impact and direction of these developments. For example, artificial intelligence is increasingly proficient in diagnostics but depends on massive amounts of patient data which may impact on transparency and patient trust, thereby necessitating the provision of guidance for healthcare professionals. Genome editing techniques which introduce inheritable changes in the human genome raise serious concerns about the possibilities of irreversible harm to future persons. Developments in neurotechnologies, such as deep brain stimulation, brain-computer interfaces, and artificial neural networks, raise the prospect of increased understanding, monitoring, but also of control of the human brain, raising issues of privacy, personhood, and discrimination.

The role of governance in biomedicine is often restricted to facilitating the applications of technology and to containing the risks that come to light. In this way, human rights considerations will only come into play at the end of the process, when the technological applications are already established, and the technological pathways often have become irreversible. To overcome this problem, there is a pressing need to embed human rights in technologies which have an application in the field of biomedicine. This implies that technological developments are from the outset oriented towards protecting human rights. For that reason, governance arrangements need to be considered, which seek to steer the innovation process in a way which connects innovation and technologies with social goals and values. 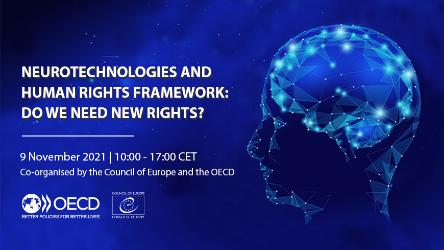 Neurotechnologies and Human Rights Framework: Do We Need New Rights?

Neurotechnologies and Human Rights Framework: Do We Need New Rights? Joint event with the OECD and participation of UNESCO