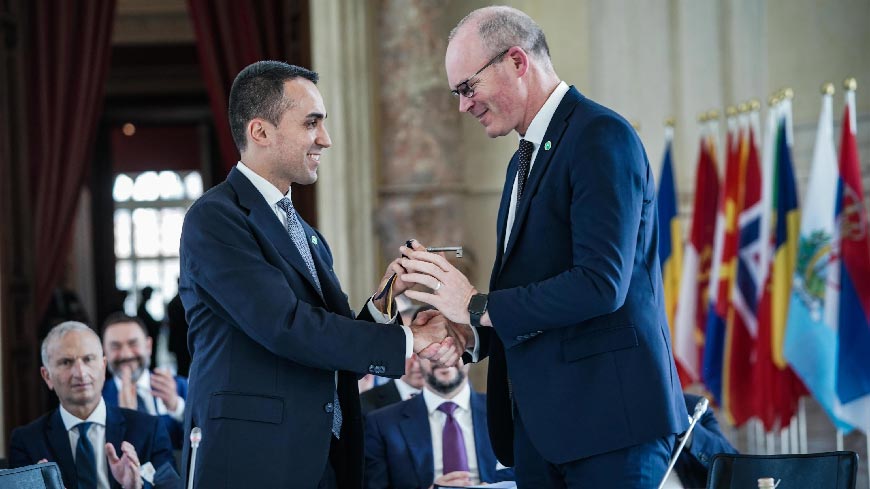 The Semester of the italian Presidency of the Committee of Ministers of the Council of Europe officially ended with the handover ceremony to Ireland. It was a busy time characterised by over 60 initiatives, both in Italy and in Strasbourg, which focused on three key priorities of the Italian Presidency. The transfer of power took place at the Reggia di Venaria in Turin, at the conclusion of the 132nd annual Session of the 46 Foreign Affairs Ministers of the member states of the Organisation, chaired by Min. of Foreign Affairs and International Cooperation Luigi Di Maio.

Occurring against the background of the aggression of the Russian Federation towards Ukraine, the meeting provided an opportunity for Ministers to reiterate their support for and solidarity with Ukraine and its people and to also reaffirm their unity around the Council of Europe values: protection of human rights and peace, democracy and the Rule of Law. These three fundamental elements were also the subjects of the annual report by the Secretary General of the Council of Europe, Marija Pejčinović Burić, which was also presented during the Ministerial Session.

At the end, Italy handed over the Chairmanship of the Committee of Ministers to Ireland, whose Minister of Foreign Affairs, Simon Coveney, presented the priorities of the Presidency of his Country: Reinforcing Human Rights and the Protection of Civilians in Europe, promoting participatory democracy and youth engagement, fostering a welcoming, inclusive, and diverse Europe.