Launched jointly by the City of Strasbourg and the Council of Europe in 2009, the "Strasbourg dialogues" aim at involving Strasbourg citizens in discussions on matters of critical importance to our future as Europeans. Held on a regular basis, the "Dialogues" help both to strengthen the "citizens' Europe" and to develop further the Europe of Strasbourg. 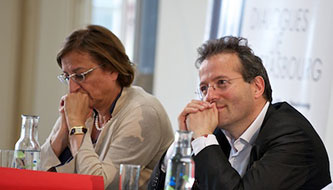 The European Year of Citizens 2013 and Europe Day are an opportunity to reflect on European citizenship.

What does it mean today to be a European citizen? Is citizenship simply about having the legal status of "citizen" and the rights that flow from it, in particular the right to vote and freedom of movement?

Civic commitment has been the guiding principle of Martin Hirsch's life. The people of Strasbourg have had a chance to hear his story as he shared with them his vision of a unifying and active civic involvement.

The 9th edition of the "Strasbourg dialogues" was held on Wednesday 15 May 2013.

Gabriella Battaini-Dragoni, Deputy Secretary General of the Council of Europe and Nawel Rafik-Elmrini, Deputy Mayor of Strasbourg, took part in the debate, alongside Martin Hirsch.