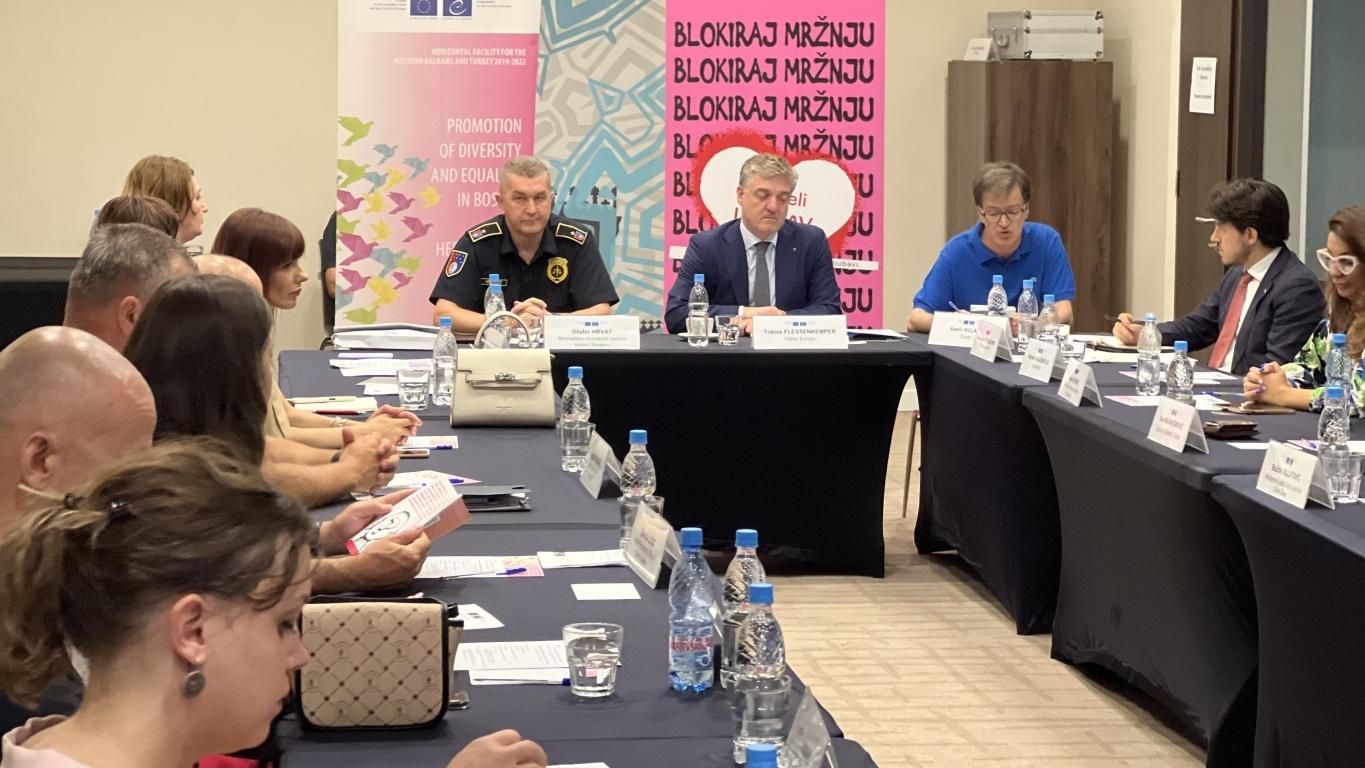 As part of the activities to reinforce the partnership between beneficiaries in the region, the joint EU and Council of Europe regional action “Promotion of diversity and equality in the Western Balkans” organised a second peer-to-peer exchange on hate crimes for police administrations of Bosnia and Herzegovina and Montenegro, which took place in Sarajevo on 24 June.

With a first exchange happening in Podgorica in December 2021, this time was the turn of the Montenegro delegation to visit Bosnia and Herzegovina. The selected date was not casual: the exchange took part back-to-back with the Pride March taking place in Sarajevo on 25 June. Security of events of the LGBTI community and the role of police was a key topic of the two days’ discussion, whereby the Montenegrin delegation presented their experience gained in securing prides in the last years. The participants to the event discussed about the role and modality of liaison officers, shared their experiences in working with LGBTI victims, including evidence collection and recording of cases, and talked about the situation with the LGBTI community. Beside protecting the Pride, protection of LGBTI community premises and other events, as well as capacities of officials working on specific cases to process those cases were also discussed in the meeting. Participants shared experiences and obstacles in sensitisation of police officers.

In his opening speech, Tobias Flessenkemper, Head of Council of Europe Office in Belgrade, noted that “international cooperation and operational exchange between police officials is an important tool to advance human rights practice in Council of Europe member states. Providing a safe and secure environment for Pride events is a crucial obligation to make sure that everyone can realise their fundamental rights and freedoms. We are happy to see police and prosecutors working on this positive agenda across borders” he said.

On this occasion, Alessandro De Giacomo, Political Officer at the European Union Delegation in Bosnia and Herzegovina emphasized that “through this EU/CoE Horizontal Facility programme, all of us are raising our voice against hate crime and hate speech by encouraging partnerships between countries, governments, civil society and citizens in promoting values of tolerance, non-discrimination, pluralism and freedom of opinion. We must not rest when it comes to building a society of equality. A society where you can be who you are and love who you want – without fear of recrimination or discrimination. Because being yourself is not your ideology. It’s your identity. And no one can ever take it away” he said.

Beside police officers visiting from Montenegro, participants also included their peers from Bosnia and Herzegovina, as well as representatives from the Public Prosecutors office of the Canton of Sarajevo.