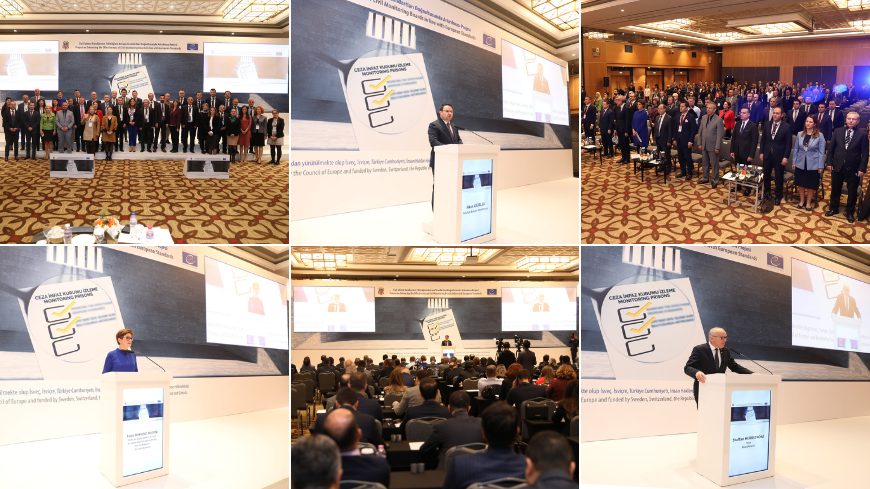 Substantial progress has been made in enhancing the capacities of the national prison monitoring mechanisms in Türkiye, significantly contributing to ensuring sustainable and continuous prevention of ill-treatment in places of deprivation of liberty, concluded the participants at the closing conference of the project on "Enhancing the effectiveness of civil monitoring boards in line with European standards”, which took place on 24 November 2022 in Ankara.

Akin GÜRLEK, Deputy Minister of Justice of Türkiye, stressed that this project has already made a tangible impact, taking into account the importance of monitoring places of detention and respecting fundamental rights and freedoms of all detained and sentences persons.

In the same direction, Fatih GÜNGÖR, Deputy Director General of Prisons and Detention Houses, Ministry of Justice, concluded that all the foreseen project outputs have been delivered, leading to an improved cooperation and coordination among all prison monitoring stakeholders. The capacities of the CMB members have significantly improved, making the outcome from the prison monitoring process more reliable and of better quality.

Staffan HERRSTRÖM, Ambassador of Sweden to Türkiye noted that “the project created environment to enable dialogue and strengthen the mutual understanding of roles and mandates within the Turkish system between all the monitoring bodies. We are very pleased with the work carried out that will further pave the way for transparency and effectiveness of the civil monitoring boards”.

Tanja RAKUSIC-HADZIC, Head of Cooperation in Police and Deprivation of Liberty Unit of the Council of Europe, highlighted that “at the end of the project’s implementation, we have managed to set preconditions for more independent, efficient and self-sustainable prison monitoring boards in Türkiye. Having in mind that the number of prisons in the country is increasing and that the number of detained and sentenced persons in 2022 has grown by 11,6 % compared to the year before, the role of prisons monitors is more important than ever before”.

All the beneficiaries and relevant stakeholders also recognised the impact of the project. One of the CMB members said that, although she has been a prison monitor since 2011, she used to have prejudices towards some categories of inmates, which has changed following her involvement in the on-site training sessions. Another CMB member noted that thanks to the new working methodology they can now conduct proper prison monitoring visits, also referring to relevant international standards. The representative of the Ombudsman office noted that nowadays, compared to three years ago, that pay greater attention and analyse the CMBs reports in detail, which is a clear indicator that confirms the quality of CMBs’ reporting has improved. The NPM representative praised the improved coordination among external prison monitoring bodies, while one of the public prosecutors said that there was a revolutionary change of mindset as a result of the project, and finally the CMB reports are being taken into consideration by the public prosecutors.

At the end, the Council of Europe expressed their expectation that the excellent cooperation with the DGPDH will continue in the future. Also, the participants were informed that the DGPDH has received an Excellence Award by the International Corrections and Prisons Association (ICPA) for Reducing Reoffending, namely for their Integration of Smart Technologies into Prisons project.

The closing conference was the final event organised in the scope of the Project entitled “Enhancing the Effectiveness of the Civil Monitoring Boards in Turkey in line with the European Standards” funded by Sweden, Switzerland, the Republic of Türkiye, the Human Rights Trust Fund and Canada.