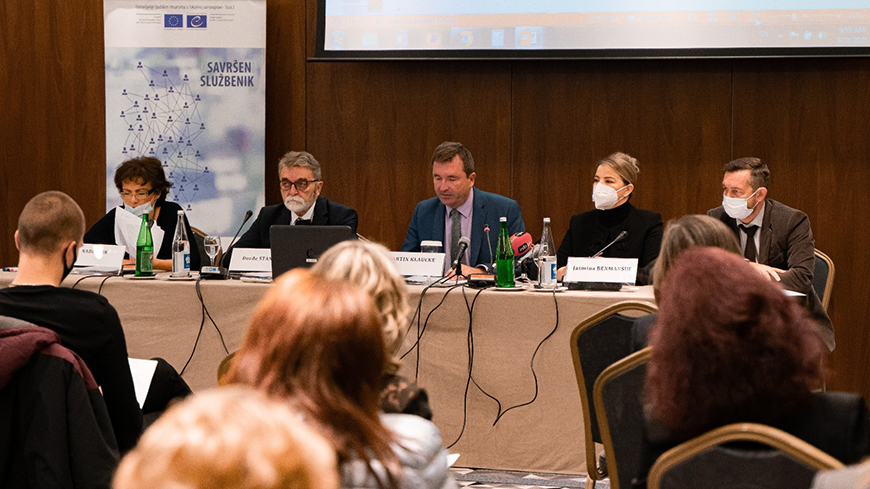 A modern and well-functioning human resource management system at the local level is crucial to ensure good governance and an efficient delivery of services to citizens, and this aspect is also enshrined in the 12 Principles of Good Democratic Governance.

The purpose of the Conference was to present the key findings and the recommendations stemming from the analyses prepared by the Programme following the implementation of Municipal Support Packages (MSPs) in 50 local self-governments, as well as the upcoming reform measures to be adopted in the field of human resource management.

Jasmina Benmansur, Assistant Minister at the Ministry of Public Administration and Local Self-Government, said that huge success was accomplished in introducing modern instruments for human resource management, capacity building and professional development in all towns and municipalities. “Professional development requires a strategic approach, and we will stay committed to this goal in line with the Strategy for Public Administration Reform for the period 2021 - 2030”.

“It is necessary to have the right people in the right places at the right time, people who are motivated, ready and qualified for their jobs. Without those conditions we cannot have an efficient public administration. That is why professionalisation and merit-based recruitment are at the centre of our activities”, said Martin Klaucke, Head of Operation II at the Delegation of the European Union to the Republic of Serbia.

Đorđe Staničić, Secretary General of the Standing Conference of Towns and Municipalities, pointed out that employees in local self-governments are willing to develop their skills in this area and to understand the importance of professional development, as well as of good human resources management.

"We are witnessing enormous energy that has been invested so far in the establishment and development of human resources management systems at local level and this type of support can be an example for some other areas of support," Staničić emphasised. He also said that the management of local self-governments must be able to self-assess the improvement of the administration, i.e. the level of knowledge and competencies of the employees.

Nadia Ćuk, Deputy Head of Mission of the Council of Europe Office in Belgrade, emphasised that local self-governments are the engine of the development of each country and one of the most important indicators of decentralisation of public administrations. ” That is why it is vital to have strong, competent and efficient local self-governments, which is the aim we want to achieve within the reform of the human resources management system for local servants in Serbia“, she added in her introductory speech.

The Conference was also an opportunity to stress the importance of this Programme: the performance index in the field of human resource management in 50 local self-governments increased by 20 percent, in comparison with the period before the Programme started. All participants agreed that there is a need to continue with this kind of support initiatives, bearing in mind the complexity of the modernisation of the local civil servants system within the public administration reform.