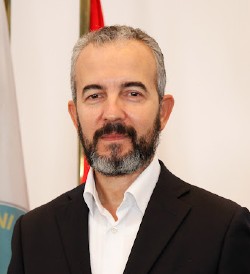 is a senior jurist with an extensive and distinguished career in the field of law, a former Appeal Court Judge, Member of Parliament and Government Minister. Mr Celibashi has served as the youngest Chair of Central Elections Commission of Albania from 2001-2006, elected from the ranks of the Assemby of Albanian Judges. He was re-appointed as the State Elections Commissioner by the Parliament of Albania in October 2020. In this role, he is responsible for the day- to-day operations of the Central Elections Commission, including ensuring that all CEC activities are conducted with the utmost integrity and objectivity. His career started right after his law degree at University of Tirana, initially appointed District Court Judge, and then Chair. For a short period Ilirjan Celibashi held the position of Deputy Minister of Public Order in 1998. From 1998 to 2001, he served as Judge at Court of Appeal. During his first tenure as Chair of Central Elections Commission, Ilirjan Celibashi managed successfully the administration of 2001 and 2005 Albanian parliamentary elections, as well as 2003 Local Government Elections. Following the elections for the Assembly of Albania of June 23, 2013, Ilirjan Celibashi was elected Member of Parliament and served the Government of Albania as State Minister for Parliamentary Affairs. Apart from his roles in the public administration, Mr.Celibashi has also served as attorney specialized in corporate and administrative law. In addition, he has been instrumental in providing expertise as a policy advisor to electoral codes and election ethics. Ilirjan Celibashi is a Honorary Member and former President of ACEEEO.