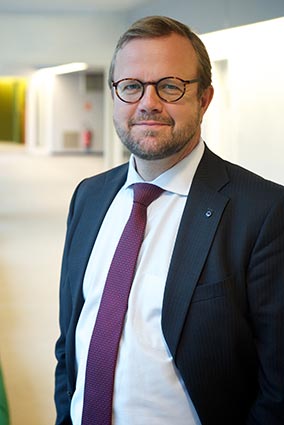 As the Deputy Secretary General he is involved in a number of key areas of the work of the Organisation, including advising and overseeing the implementation of the Secretary General’s reform agenda, in line with the decisions and priorities of the Committee of Ministers.

His priorities include shaping the Programme and Budget, while ensuring that the Organisation’s activities have maximum impact in advancing democracy, human rights and the rule of law. He also oversees the Council of Europe’s staff policy, as well as other key areas of the work of the Organisation.

Before taking up his post, Mr Berge was for a period of four years Director General and Secretary to the Committee of Ministers of the Council of Europe.

Between 2009-2017, he served as Director of the Private Office of the Secretary General and the Deputy Secretary General, helping to prepare, co-ordinate and implement a number of comprehensive reforms of the Organisation.

Mr Berge has over thirty years of international professional experience.

As a former Norwegian diplomat, he served as International Adviser to the Prime Minister and as Deputy Director of the Foreign Minister’s Cabinet responsible for all matters related to Parliament. He also served as speechwriter to three Norwegian Foreign Ministers.

Mr Berge has published several books on a range of issues relating to speech writing and speeches, as well as articles on the Council of Europe’s mandate and work.

He was a Fulbright Scholar and holds a M.A. in International Relations from the Paul Nitze School of Advanced International Studies (SAIS), Johns Hopkins University, Washington D.C., USA.

Access to social and medico-social services for ALL: a springboard out of poverty

A “Living Instrument” for Everyone: the role of the European Convention on Human Rights in advancing equality for LGBTI persons