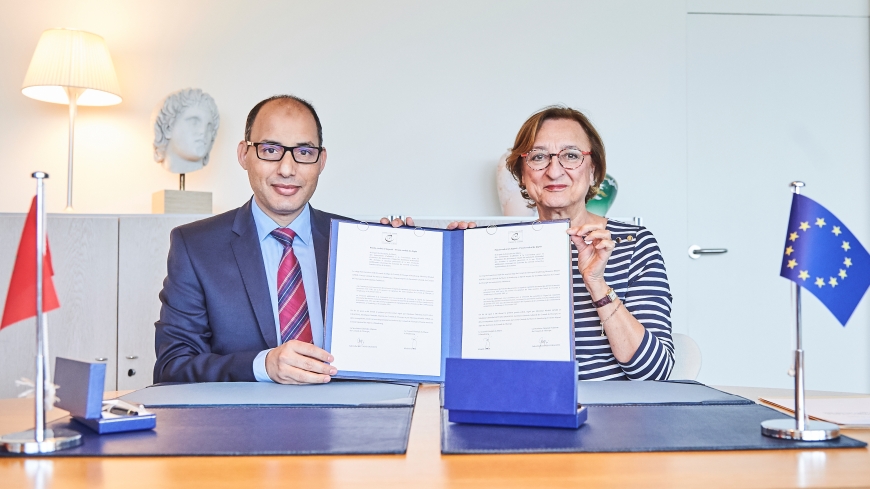 Morocco becomes the 55th State party to the Convention for the protection of individuals with regard to Automatic Processing of Personal Data, also known as “Convention 108". It is also the 6th country in the African region to accede to it.

Today, Mr Khalid AFKIR, Consul General of Morocco in Strasbourg deposited the instruments of ratification of Morocco to the Convention for the Protection of Individuals with regard to Automatic Processing of Personal Data (ETS 108) and to its additional Protocol regarding supervisory authorities and transborder data flows (ETS 181) in presence of Ms Gabriella Battaini-Dragoni, Deputy Secretary General of the Council of Europe.

The Convention and the additional Protocol will enter into force in respect of Morocco on 1 September 2019.

“Convention 108” is the only existing international treaty which grants individuals the right to the protection of their personal data, aiming also to prevent any abuses which may accompany the processing of these data. Being open to signature by any country, it is the only binding standard which has the potential to be applied worldwide, providing legal certainty and predictability in international relations.

The Data Protection Unit welcomes its co-operation with its Moroccan counterparts, notably in respect of the implementation of the “South III programme: Ensuring sustainable democratic governance and human rights in the Southern Mediterranean” in partnership with the Commission nationale de contrôle de la protection des données (CNDP)