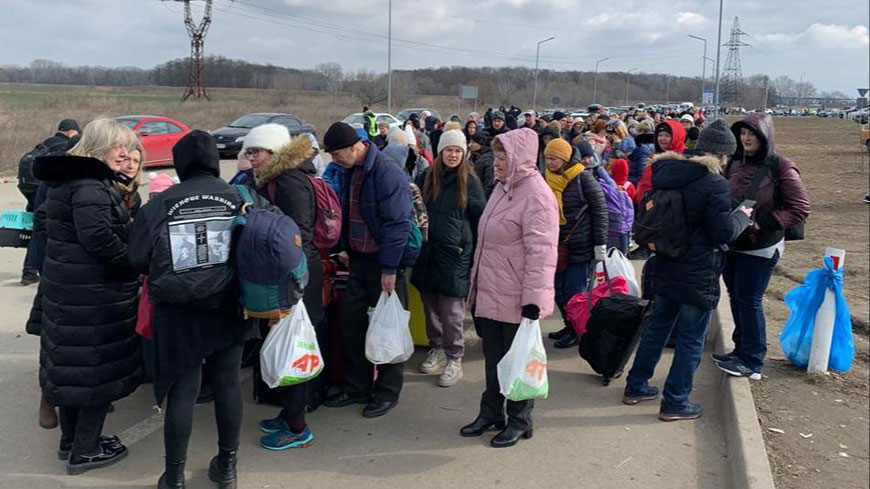 At Palanca border crossing, the Commissioner is listening to traumatic experiences of families, women, children, older people and people with disabilities fleeing the war in Ukraine, waiting to reach safety in the Republic of Moldova. 8 March 2022. © Council of Europe

The Moldovan authorities, NGOs and many ordinary citizens have stood up to the daunting challenge by mustering a humanitarian response, coordinating the provision of assistance to meet the basic needs of the arriving people, making reception centres available, and ensuring medical, psychosocial and administrative support. Since the beginning of the war, they have been dealing with a humanitarian emergency with very limited resources. “The enormous help offered to people fleeing the war in Ukraine in the Republic of Moldova and in other countries of arrival is a truly heart-warming demonstration of humanity,” added the Commissioner. “Thousands of people have come forward – volunteers, central and local government workers, civil society organisations, and ordinary people, young and old – selflessly working long shifts and going out of their way to provide help. Many NGOs, like the Casa Concordia, have rapidly refocused their ordinary activities to provide urgent humanitarian assistance, including food, clothing, safe shelter, means of communication, and toys for children.”

As the intensification of Russia’s attacks and the growing loss of civilian lives, amid continued reports of violations of human rights and international humanitarian law, prompts even more people to flee abroad in search of safety, the situation remains extremely volatile. The international community should urgently step up its assistance to the most exposed countries of arrival, in particular the Republic of Moldova. More funding and institutional support, including manpower, skill, and expertise is urgently needed, as well as longer-term economic, humanitarian and institutional support, in order to help them to urgently scale up their response as needed. It is also very important to provide support for the early identification of vulnerable persons, especially women and children – who constitute 89% of all those who fled Ukraine to the Republic of Moldova – and their protection from gender-based violence, human trafficking, and exploitation. As with previous situations of large-scale arrivals of people seeking protection, dealing with the inflow of people must not be the sole responsibility of individual countries but a European one, with human rights protection and solidarity at its centre.

In order to protect the rights of the people fleeing from Ukraine who decide to remain in the Republic of Moldova, a long-term approach will have to be adopted and strategies and integration measures envisaged in good time, including through creating opportunities for child refugees to continue their education and by offering psychological assistance to all those who need it. “Even with the enormous amount of assistance and compassion, the human consequences of this war for the people of Ukraine are unfathomable. They have been deprived of their most basic human rights and their dignity was shattered. The deep wounds inflicted by this war will take a long time to heal.”, concluded the Commissioner.

During her emergency mission, the Commissioner visited a former boarding school in Cărpineni, urgently repurposed to serve as emergency housing for people fleeing the war, and a home for mothers and children in Ruseștii Noi, managed by the Moldovan office of the NGO Casa Concordia. The Commissioner and members of her team also visited emergency reception centres for people who fled Ukraine, located at the MoldEXPO international exposition centre and the Manejul sports hall in Chisinau. Together with a delegation from the OSCE Mission in Moldova, the Commissioner travelled to Palanca in the southern area of the Republic of Moldova and visited both sides of the border crossing between Ukraine and the Republic of Moldova, as well as a temporary reception camp on the Moldovan side in Palanca. In Chisinau, the Commissioner held meetings with the Minister of Interior, Ana Revenco; State Secretary of the Ministry of Foreign Affairs and European Integration, Vladimir Cuc; the Ombudsman, Ceslav Panico, and the Children’s Rights Ombudsman, Maia Bănărescu.