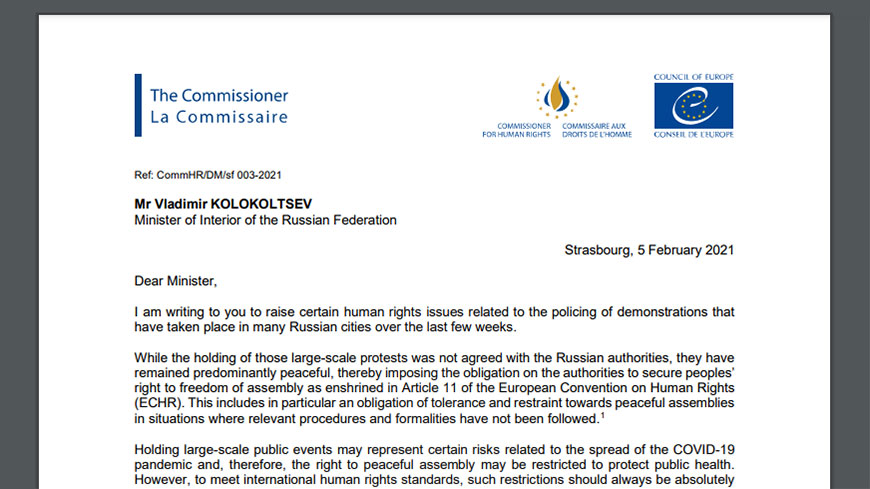 Today the Commissioner for Human Rights, Dunja Mijatovic published a letter addressed to the Minister of Interior of the Russian Federation, Vladimir Kolokoltsev, in which she highlights a number of human rights concerns related to the policing of demonstrations that had taken place in many Russian cities over the last few weeks.

The Commissioner stresses that the Russian authorities failed to uphold their obligation to ensure freedom of assembly and that restrictions applied on the grounds of the COVID-19 pandemic did not respond to public health considerations in a manner compatible with the principles of absolute necessity and proportionality established by international human rights standards.

The Commissioner also expressed concerns about the arbitrary arrests of a high number of individuals all across the country during the demonstrations, and enquired about the Ministry of Interior’s policy, methods and guidelines concerning the dispersal of peaceful assemblies and the deprivation of peaceful demonstrators’ liberty. She requested clarifications as to the reasons for the arrests of journalists and media workers reporting on those rallies, as these constitute serious restrictions of freedom of expression and media freedom as guaranteed in the European Convention on Human Rights.

The Commissioner is particularly dismayed to receive numerous reports of excessive use of force and violence against peaceful protesters by servicemen exercising public authority during those demonstrations and she requested information on any action taken by the authorities to ensure accountability of law enforcement officers for any cases of arbitrary use of force or any other human rights violations committed against demonstrators during rallies or afterwards.

The Commissioner also notes that many individuals apprehended during the protests have allegedly been ill-treated while in custody. She also refers to reports about dozens of demonstrators who were allegedly kept in police vans in appalling conditions over a prolonged period of time due to the inability of the relevant authorities to provide them with due facilities. She considers that such a situation, if confirmed, amounts to inhuman and degrading treatment and that all necessary and urgent steps should be taken to stop this practice immediately. She urges the Minister to ensure that the rights of those in detention are fully respected as a matter of urgency and she calls on him to use his authority to ensure that law enforcement authorities immediately stop the practice of apprehending individuals who exercise their right to peaceful assembly and, more generally to bring policing of demonstrations in line with applicable human rights standards as a matter of priority.