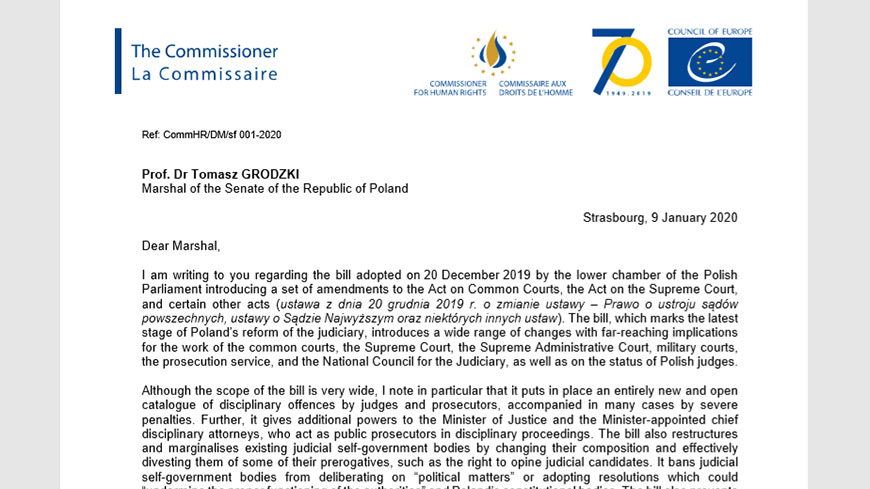 The Commissioner published today a letter addressed to the Marshal of the Senate of Poland in which she recommends rejecting the bill adopted by the Sejm on 20 December 2019.

The Commissioner considers that the bill has far-reaching negative implications for the work of the judiciary in Poland, putting in place new disciplinary offences and further subordinating the judiciary to the executive by providing additional powers to the Minister of Justice and the Minister-appointed chief disciplinary attorneys, who act as public prosecutors in disciplinary proceedings.

“I am particularly concerned that the provisions of the new bill are designed to further silence dissent among critical judges and prosecutors and to curtail their independence”, writes the Commissioner, stressing that in line with the case-law of the European Court of Human Rights, “judges and prosecutors have the right to express their views on matters of public interest, including government reforms of the judiciary and the prosecution service, in a proportionate way, and their freedom to do so must be safeguarded”.

Welcoming the announcement of the Marshal that the Senate would hold a broad and open debate around the bill and consult with national and international stakeholders and experts, the Commissioner reiterates the need for Poland’s authorities to “ensure that any legislation passed is in full compliance with the relevant standards of the Council of Europe and in particular the relevant past and future recommendations of the Venice Commission.”