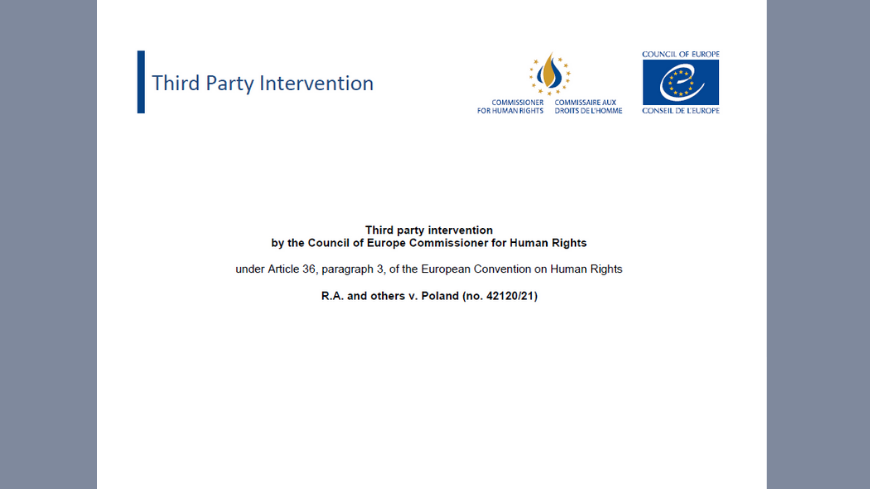 Today, the Commissioner published her written observations to the European Court of Human Rights on the case of R.A. and others v. Poland concerning the situation of asylum seekers and migrants stranded at the border between Poland and Belarus. The Commissioner’s observations were submitted in view of the Commissioner’s concerns about the situation in Poland, following her mission to the country from 15 to 18 November 2021, but also in light of the relevance of the case to the wider issue of pushbacks and human rights violations at Europe’s borders.

The Commissioner considers that a repeated and systematic practice of pushing migrants and asylum seekers back to Belarus exists in Poland. Such pushbacks happen without regard for those persons’ individual situations and in particular, whether they may be entitled to international protection. Furthermore, recent changes in Poland’s regulatory framework have made it largely illusory for those persons to access individual procedures and to apply for protection in Poland. The Commissioner observes that this practice is also likely to put them at risk of torture or inhuman or degrading treatment at the hands of Belarusian state agents, which is incompatible with Article 3 of the European Convention on Human Rights. She notes that the treatment of migrants and asylum-seekers by Belarus is well-documented and is, or at least should be, known to the Polish authorities.

The Commissioner also considers that the Polish authorities’ failure to provide humanitarian assistance to asylum seekers and migrants, and the restrictions put in place by Poland on access to the border zone for persons and organisations providing humanitarian assistance and legal aid, raise concerns under Article 2 (the right to life) and Article 3 of the European Convention on Human Rights. These actions have further aggravated the already dire humanitarian, material and sanitary situation of many asylum seekers and migrants trapped at Poland’s border with Belarus. This has resulted in severe damage to health among many of them and extensive loss of life among those most unfortunate. The limited availability of humanitarian assistance and legal aid to asylum seekers and migrants trapped in the woods is further compounded by the harassment and intimidation targeting humanitarian organisations, activists and local residents providing such help, partly fuelled by the stigmatisation of migrants and refugees in the official narrative.